"Moonlight and Magnolias" at Lyric Arts 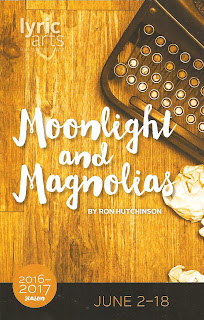 Although it became and still remains the highest grossing film of all time (adjusted for inflation), Gone with the Wind had an infamously difficult beginning. Producer David O. Selznick bought the rights to the popular book shortly after it was published in 1936, and spent years obsessing over every detail of the production, hiring and firing directors and screenwriters along the way. The play Moonlight and Magnolias, which premiered at Chicago's Goodman Theatre in 2004, imagines one week in this years-long process in which Selznick locks himself in his office along with screenwriter Ben Hecht and director Victor Fleming to rewrite the script after filming has already begun. The play is part hilarious look at Hollywood and what makes it tick, part recap of the popular movie, and part exploration of the balance between making a movie you can stand behind and giving the people what they want. Lyric Arts' production is fast and funny, with a strong four-person cast that works and plays well together.

I must admit, there was a time in my youth when I was a bit obsessed with Gone with the Wind, both the book and movie. I was enamored with the epic story, sweeping romance, and strong heroine Scarlet O'Hara. I have since come to realize that it is the epitome of the antebellum melodrama, romanticizing a lifestyle built on the inhumane system of slavery, one we fought a war to eradicate. But it never occurred to me that the makers of the film struggled with that too. The character of Ben Hecht, who in real life was a Civil Rights activist and Zionist, had never read the book before being asked by Selznick to rewrite Sidney Howard's screenplay, and is flabbergasted when he learns that the hero of the story is "a two-timing adulteress slave-owning murderer," calling the book "an elegy to the Old South." He continually questions Selznick, asking him how his conscience can allow him to tell this story in which the "heroes" participate in a Klan raid, calling on him as a fellow Jew to think about what's brewing in Europe (did I mention this is 1939?) and the parallels to slavery. Selznick claims he's just giving the audience, the true power holders, what they want, and promises to make the black characters as fully formed as the white characters. A sad compromise but maybe a necessary one at the time, and while Hattie McDaniel did become the first African American actor to win an Oscar for her role as Mammy, she did so by playing a stereotypical role (see By the Way, Meet Vera Stark for more on that issue). In the end Ben decides to help his friend David make the movie he wants to make out of what he calls "either a very good bad book or a very bad good book."

Since Ben Hecht (Jeffrey Maas) is seemingly the only person in America in 1939 who hasn't read Gone with the Wind, Selznick (David VanDerGriff) and Fleming (Warrn Sampson) act out the book for him while he writes the screenplay. Selznick's dutiful secretary Miss Poppenghul (Autumn Sisson) is just an intercom away to bring them peanuts, bananas, and anything else they might need. Under director Adrian Lopez-Balbontin, the cast really plays up the comedy of the characters and situations, much of which comes from their ridiculously melodramatic acting out of scenes from the books, including a silent sequence of hilarious tableaux. The instantly recognizable old Hollywood office (with clean detailed design by Jane Raine) becomes more and more messy as the men work, until the second act opens on a veritable pig sty, which eventually must get cleaned up again as the frantic week comes to a close.

While it is really funny, there are a couple things about this play that are uncomfortable, perhaps intentionally so. The men use sexist and homophobic language common at the time. At best the audience reacts with: wow can you imagine people used to talk like that? At worst, they laugh at the inappropriate comments rather than being shocked by them. But what made me most uncomfortable was when Fleming acted out the role of the young black maid Prissy (in the infamous "I don't know nothin' 'bout birthin' no babies" scene). A white man adopting a high-pitched voice and speaking pidgin English in the impersonation of a black girl feels inappropriate, as does the laughter elicited from Lyric Arts' predominantly white audience (bringing to mind the recent conversation co-hosted by the Twin Cities Theater Bloggers and the Guthrie, in which the issue about laughing for the wrong reasons was brought up). In fairness the audience does also laugh at Fleming's Clark Gable impersonation, but there are larger implications in the Prissy impersonation. I hope that the audience thinks about those implications rather than just laughs as the easy humor on the surface of it.

Ben Hecht wants David Selznick to make movies that will force American to look at its ugly history (and present) in the face. David Selznick wants to make the escapist entertainment that America wants. Hopefully this play is a little bit of both - a hilarious romp through one crazy week in Hollywood history, with a little something serious to say about the purpose of art and our difficult history as a nation. Moonlight and Magnolias continues at Lyric Arts in Anoka through June 18.