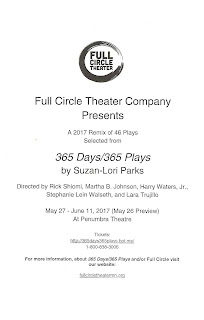 About 15 years ago, Pulitzer Prize-winning playwright Suzan-Lori Parks gave herself a challenge - write a play every day for a year. New #TCTheater company Full Circle Theater (they've been around a couple years but this is just their second production) has chosen to produce a "remix" of 46 of these plays in just over two hours. The result is a mishmash of stories, characters, and conversations, seemingly unrelated, but with some common threads to be found. Full Circle is intentionally multiracial, with a mission "to produce heartfelt, groundbreaking theater that artfully addresses issues of human nature and social justice for 21st century audiences." A wonderful goal, and 365 Days/365 Plays is an interesting, perplexing, thought-provoking step towards it.

The 46 plays range in length from less than a minute to just under five minutes, chosen and arranged by Full Circle's co-Artistic Directors Rick Shiomi and Martha B. Johnson, who also direct some of the pieces. There's quite a wide range, and I won't pretend to understand all of them, but there's definitely a lot to hold your attention as we travel across time and space. Some of the plays are funny and absurd, some are somber. Some have many characters, some just two. Some have music or movement, some are like poetry. Most are seemingly simple scenes of everyday life, although some are fantastical or historical. But there's something profound about all of these little scenes play out one after the other with a cast of diverse ethnicities and walks of life.

Scene transitions are remarkable smooth, for as many of them as there are, all set against a rustic backdrop adorned with a few tools that could be from any time in history. The cast is dressed in a base of basic gray, with a few character defining pieces added for some scenes (scenic design by Dan Keyser and costume design by Trevor Bowen). The ten actors (Ashawnti Ford, Daniel Coleman (taking over for James A. Williams who performed the first weekend), Daniel Sakamoto-Wengel, Elizabeth Cates, Gaosong Vang Heu, Marcos Lopez, Matthew Thompson, Ricardo Beaird, Shana Eisenberg, and Siddeeqah Shabazz) form a wonderful ensemble and are all so open and present and committed as they each play dozens of characters.

There was a post-show discussion the night I saw the show, which helped me to process and make sense of what I had just scene (pro tip: always stay for the talk-back). Some themes that came out at the discussion were the simplicity and complexity of the piece, the way that the plays together speak to the interconnectedness of us all, and the opportunity to rewrite history and claim it for our own (see also, Hamilton). In fact, this show, this cast, this theater with their mission of diversity, representation, and justice, is exactly what we need in this post-Hamilton world. A world in which all of us are represented in the stories we tell.

365 Days/365 Plays continues at Penumbra Theatre through June 11. And if you're interested in discussing or learning more about the idea of representation, consider attending one (or both) of these discussions next week: