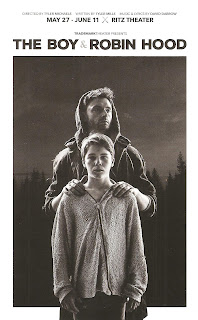 A third new theater company is making its #TCTheater debut this month, following a charming new original musical Ragtime Women by Theatre Elision and Little Wars, a powerful story of women in their prime brought to us by Prime Productions. Now we have Trademark Theater, comprised of the Tylers Michaels (founder and artistic director) and Mills (artistic associate and resident playwright), with Emily Michaels King on marketing and graphic design. Their mission is to "expand the breadth of original theatrical works born in Minnesota by creating, developing, and producing dynamic stage productions." Their first creation is a new adaptation of an old story - Robin Hood. And it most definitely is original and dynamic. I saw a reading of it as part of Illusion Theater's "Fresh Ink" series last year (under the title The Gest of Robin Hood) and was impressed with the storytelling and original music (written by David Darrow). But now, with the added elements of movement, costumes, set, lighting, and all of the theater magic, plus a super talented and energetic young cast, it's something truly exciting.

This Robin Hood story, as written by Tyler Mills, is told through a boy named Much, an orphan on the run who finds a home with Robin and his merry band of outlaws. Much thinks that Robin can do no wrong, that everything he does is justified, and that life is full of marvelous adventures. Marian, who in this version of the story is not simply a love interest, but was once a member of the merry band, tries to warn Much that there's a dark and rageful side of Robin, but he doesn't believe it, until he sees for himself the devastation that can result from Robin's actions. For this is not a simple, happy, heroic Robin Hood tale. Rather, it harkens back to the very origins of the legend (see the helpful timeline in the program) with a much darker and more brutal Robin that the one we think of today. A world where crime and violence have consequences, where the good guys don't always win, where it's often difficult to tell the good guys from the bad. If you're thinking this might be fun romp to which you can bring your little ones, think again. This is a very grown up Robin Hood.

In the bathroom during intermission (which is actually a really interesting place to gauge audience reaction), I heard someone say, "this is why we need more women in office - testosterone." There definitely is a lot of it onstage in the predominantly young and male cast. From the king to the sheriff to the soldiers to our outlaw/heroes, there is a lot of fighting and posturing, and they make quite a mess of things. There aren't many women in the Robin Hood legend or in this play, but at least we have a Marian that's more than just a damsel in distress, who has a few hero moments of her own and serves as the rational yin to Robin Hood's primal yang. Perhaps if there had been a few more women in the band things would have turned out less badly.

But what a merry band it is, this cast full of up-and-coming young talent familiar from multiple stages around town. Starting with the youngest, 8th grader Peder Lindell is quite the pro, taking the lead as the titular boy and giving us a hero to root for, as we watch him grow from a naive boy to Robin Hood's hopefully smarter heir apparent. As Robin himself, Riley McNutt (who also played the role in last year's reading) is full of charm, bravado, and barely controlled rage. Much's closest friend in the band is Alan, played by Nathan Barlow with so much heart, humor, and irresistible charisma that (spoiler alert) his absence is palpably felt in the second act. The rest of the band is also well-cast with Paul Rutledge as Robin's serious right-hand man John, Theo Langason as the genial Friar, and Ryan London Levin as the hot-headed Will Scarlett. The boys play, fight, and dance well together. Completing the Robin Hood mythology we have a strong Kendall Anne Thompson as Marian; Jason A. Rojas, bringing much internal conflict to the role of the Sheriff; and a truly terrifying Dan Hopman as Robin Hood's nemesis Guy of Gisborne. The hard-working and beautiful-singing ensemble includes Anna Beth Baker, Tim Beeckman Davis (with a memorable turn as the evil king), Benjamin Dutcher, Elizabeth Hawkinson, and Lars Lee.

Yes, I said dancing and singing! But this is not "Robin Hood: The Musical," it's a much more thoughtful "theater musically." Music is added organically in the form of a chorus that sings narration, and occasional songs by the troubadour Alan-a-Dale. David Darrow's original score feels both ancient and modern at the same time, perfectly suited to the story, with Nic Delcambre leading the off-stage band. I've had the pleasure to see several of the shows for which David has written the score (see this and this and this), all with completely different styles perfectly suited to the story. I'm beginning to think there's no style of music he can't write authentically and originally (I'm waiting for his rap musical). The sparse and thoughtful addition of music works beautifully well, but selfishly I wish there were more of it. There are a lot of talented voices in this cast that we don't get to hear from much or at all, and I couldn't help but wish for a Robin/Marian duet just so we could hear Riley and Kendall's gorgeous voices joined together. But alas, this isn't that kind of show (maybe they can do a companion cabaret show with a duet of "Everything I Do, I Do It For You," and now I've just dating myself with my Robin Hood frame of reference). My only real complaint with the music is that the sound was often too loud, with all of the actors miked to be heard over the music, but still amplified even during dialogue scenes with no musical score. Maybe they wanted it to sound like a rock concert, but it was too much sound for that intimate space. I didn't notice it as much in Act II, and I did see a preview, so hopefully they'll continue to work out the sound mix in the Ritz, which can sometimes be a tricky space.

The look of the show, however, is spot on. The set has a large series of rocks for the merry band to climb, run, and jump over and around (which they do, thanks to the cool and dynamic movement designed by director Tyler Michaels, and Annie Enneking's always thrilling fight choreography). Several large trees look like they've grown out of the floor of the Ritz stage. The costumes look appropriately period (with Robin wearing the traditional green and brown) with a modern touch. And the lighting burns red as the violence increases. (Scenic design by Sarah Brandner, costume design by Sarah Bahr, and lighting design by Mary Shabatura.)

This month saw the promising debuts of three new theater companies, and the possible demise of another. Starting a theater company ain't easy, with much (pardon the pun) to think about besides just the art itself. I wish much luck to Trademark Theater and the others making their debut this month. Hopefully they will learn from their predecessors and make wise choices, because I want to see more shows like The Boy and Robin Hood - exciting, creative, engaging, and bold. Continuing at the Ritz Theater in Northeast Minneapolis through June 11.