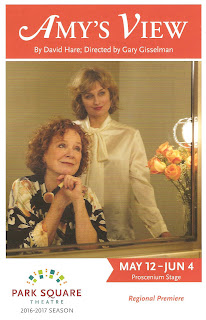 Shortly after Mother's Day, Park Square Theatre brings us a mother/daughter story that is just one of the "complicated relationships" (the name of the signature drink accompanying this show) in Amy's View. Theater, criticism, art, finances, and messy relationships of all sorts are exposed in this play that spans 15 years. The play perhaps tries to cover too much, in time and topics, but the excellent cast and design make it worth the ride.

The story plays out in four scenes, representing four time periods from 1979 through 1995, that almost feel like four different plays with overlapping characters. Being linear-minded, I would have appreciated the exact year of each scene spelled out in the program, but I guess one can assume each is roughly five years after the last. In the first scene, we are introduced to the titular Amy and her mother Esme, a famous stage actor in London who takes a taxi home to her house in the suburbs every night, where she lives with her late husband's mother Evelyn. Amy brings her boyfriend Dominic, a film critic, home to meet her mother, which doesn't go smoothly (if it did, there would be no play). In the next scene, Amy and Dominic's relationship, and his career, have progressed, while Evelyn's health and Esme's career have declined. The next time jump brings us to financial and relationship crises for several characters, and the final scene gives us a sad sort of resolution to the affairs.

The play felt a bit scattered to me, there's so much going on that I wasn't sure what to take away from it. But there are some great debates about art vs. arts criticism, theater vs. television, the relevance of theater to the younger generation, the usual mother/daughter conflicts, and financial issues. And this cast is a pleasure to watch. The fabulous Linda Kelsey (a local actor who, ironically, had success as a TV actor before returning home to grace the #TCTheater stages) and always wonderful Tracey Maloney are so believable as mother and daughter (not just because of their beautiful curly hair) that I feel like they must have played it before. Gabriel Murphy is the one you love to hate as Dominic. Cathleen Fuller gives three distinct and specific performances as Evelyn, who fades from a lively spitfire of a woman to a faded version of herself. Nathaniel Fuller is so sweet and gentle as Esme's friend and financial adviser that you almost forget he's the bad guy. And James Rodriguez shows up to steal the fourth scene as Esme's fellow actor (with the most consistent and charming accent).

Aaron Chvatal's costumes take us from the bell-bottomed late '70s through the shoulder-padded '80s and into the '90s. But Esme's house mostly remains the same, a charming home complete with attached porch/greenhouse (set design by Joseph Stanley). And listen for the period-specific music playing before the show and during intermission (I'll say it again - I wish all of the theaters listed the songs used before and during the show in the program).