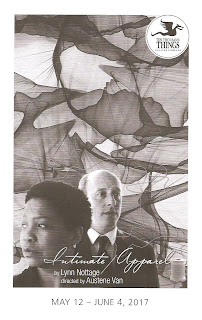 I saw recent two-time Pulitzer Prize winner Lynn Nottage's play Intimate Apparel at the Guthrie almost 12 years ago. I usually don't remember anything about shows that I saw before I started blogging in 2010 (that's why I started blogging, to keep a record of my theater experiences), but I clearly remember loving this play. I even remember the basic plot, although not a lot of details. But what I remember most clearly is that feeling you get when you see a play that really touches you, really gets under your skin, and stays with you - even for 12 years. Last weekend I saw Ten Thousand Things' new production of Intimate Apparel, and now I remember why I love this play so much. It's a beautiful story of a woman discovering her strength through friendships, a failed relationship, and her own sense of self-worth. And as always, Ten Thousand Things brings us the truest version of the story, with little in the way of sets, lighting, or other theater magic to get in the way. Along with beautifully real acting, clear direction, and an intimacy with the story that only the specific TTT "all the lights on" up-close-and-personal style can bring, this Intimate Apparel is one I will remember.

Unlike most Ten Thousand Things shows, in which a small cast plays multiple roles in a large character play like Shakespeare, Intimate Apparel has just six characters, played by six actors. While it's often fun to watch actors transform themselves into different characters, it's also nice for them and us to be able to really get to know these few people. In 1905 Lower East Side (aside: next time you're in NYC visit the Tenement Museum to learn about the history of the Lower East Side which is a history of immigrants, a history of America), Esther Mills lives a simple life in a boarding house, sewing "intimate apparel" for rich ladies. She has a good, if not very exciting, life, surrounded by friends Mrs. Dickson, owner of the boarding house, a prostitute named Mayme, and Mr. Marks, the Jewish man who sells her fabric. But she longs for more, having just turned the ripe old age of 35 and never married. Enter George Armstrong, a Panamanian friend of the deacon's son who begins writing to her. Esther is wooed by his fancy words and agrees to marry him. But when he arrives in NYC things don't work out as expected (they rarely do). This play may not have the traditional "happy ending," but this was a journey Esther needed to go through, and she came through the experience stronger than she was before.

Austene Van takes her first turn as director of a TTT show (I believe) and delivers a clear story, while allowing the emotions of the characters to come through. The six-person cast includes two of the best young actors in town making their TTT debut: the Twin Cities Theater Bloggers' 2016 favorite dramatic performer Darius Dotch is wonderful as he transforms from the smooth-talking fantasy of George to the real-life one, who's considerably less charming. Dame-Jasmine Hughes, winner of a 2016 Ivey Award for her performance in Penumbra's Sunset Baby, plays the sympathetic prostitute. The rest of the cast are familiar to TTT regular audiences. Karen Wiese-Thompson often plays the clown (and is hysterically funny), but here she's given the chance to go a little deeper as a wealthy neglected wife. George Keller is also fantastic as Mrs. Dickson, a tough but elegant woman, and still providing a bit of comedy and fun. Kris Nelson brings so much warmth to the character of Mr. Marks. And saving the best for last - Aimee K. Bryant is excellent as Esther, playing the nuances of all of the emotions that the character goes through, bringing the audience along in every triumph and heartbreak (with a lovely bit of singing to open and close the show in a perfect full circle moment).

TTT performs in a small square space surrounded by a few rows of chairs. This space easily and believably transforms from Esther's room to the various other locations she visits with just a different arrangement of two versatile iron set pieces - a sewing table/piano and a bed that ingeniously transforms into several different distinct arrangements with the addition or subtraction of pieces (set design by Stephen Mohring). Trevor Bowen's gorgeously simple and simply gorgeous costumes include stunning corsets, luxurious fabrics, Esther's simple white skirt and blouse that becomes a wedding dress with the addition of a bit of lace, Mrs. Dickson's beautiful lace and floral patchwork period dress, Mr. Marks' elegant black suit, and George's cool white linen clothes. Annie Enneking ably takes over for usual music and sound magician Peter Vitale, playing multiple instruments and providing a soundtrack that suits the story.

The lovely and moving Intimate Apparel moves back to the intimate space at Open Book for the next two weekends, with a few free shows still available.