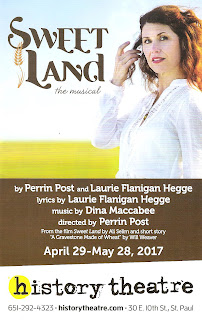 My sister's and my favorite movie (well, one of them) is the 2005 Minnesota-made film Sweet Land, written and directed by Ali Selim based on Will Weaver's short story A Gravestone Made of Wheat. We often watch it at the cabin as a way to transition out of our busy city lives and into a calmer more nature-focused time. When I told her about the lovely new musical adaptation, now making its official debut at the History Theatre after years of development, she asked me, somewhat skeptically, "how do they represent the beautiful sweeping landscapes of the film?" The answer, of course, is music. We may not see the endless waving fields of wheat and the flocks of ducks flying overhead, but thanks to lyrics like the above (by Laurie Flanigan-Hegge*) set to a gorgeous folk/Americana score by Dina Maccabee (arranged by Robert Elhai), strung together in a book by Laurie and director Perrin Post (whose brilliant idea it was to make this musical), you see the landscape in your mind's eye and feel it in your heart. Like the film but in a different way, Sweet Land, the Musical tells a beautiful story of love, community, and connection to the land, one that, as a descendant of German immigrant farmers, feels like my story.

For those of you unfamiliar with the movie, the story is a familiar and quintessentially Minnesotan one of immigration, building a community, and making a living off the land. Norwegian immigrant Olaf Torvik's parents send him a wife from Norway. But the catch is that Inge Altenberg is originally from Germany, and this is 1920, when Germans are seen as the enemy due to the recently ended WWI. The pastor of this primary Norwegian Lutheran community refuses to marry them, as does a judge, without further documentation that Inge is not a spy or a communist. Knowing very little English, Inge takes up residence with Olaf's neighbor Frandsen, his wife Brownie, and their many children. She eventually tires of this and, longing to be in her own home and begin the life she came here to live, moves in with Olaf. Even though Olaf sleeps in the barn, the arrangement is frowned upon by the pastor and the community, and Olaf and Inge are shunned, until a crisis brings them together. It's a simple story (bookended by the couple's present-day grandson trying to decide whether or not to sell the land), but one that feels true and is beautifully told.

Sweet Land, the Musical reminds me a little of the Tony-winning musical Once, both in the way that things unsaid in the film have to be said a little more clearly on stage, and also in the way that the band is part of the ensemble, rather than a separate entity. The 13-person ensemble includes six members who play instruments as well as characters in the story, making the music an organic part of the storytelling. Among others, musical director Jason Hansen steps out from behind the piano to play a "socialist" trying to organize the farmers, and Matt Riehle plays the guitar and the auctioneer, in a thrilling auction sequence. Other musical highlights include the rousing "Threshing Time," the double duet ballad "Frozen Fields," the whimsical "Ducky" and "You Took a Bath," and the poignant "Land So Sweet" that opens and closes the show. (If a cast recording were available I would listen to it obsessively, as I do.) Joe Chvala's trademark percussive choreography punctuates the more energetic moments, and is more smooth and lyrical in quieter moments.

I cannot imagine anyone playing the roles of Inge and Olaf other than Ann Michels and Robert Berdahl. Ann has been involved in the development of the piece since the very beginning, and Robert has played Olaf in most of the readings I've seen. Ann just is Inge, this smart and funny woman who travels halfway across the world to build a new life for herself, terrified but determined to thrive. Robert is also wonderful as the very familiar stoic Minnesota farmer (and his grandson), afraid of his feelings but slowly warming to Inge. The strong supporting cast includes Jon Andrew Hegge as the fun-loving and slightly irresponsible Frandsen, Tinia Moulder as his friendly wife Brownie, Michael Gruber as the disapproving pastor, and Norah Long and James Ramlet (both of whom always make everything better) in a number of roles.

The simple set includes the shell of a barn on the side, where the band often camps out when not in the middle of things, a few rustic set pieces including a rolling car/tractor, and the silhouette of a windmill, in stark contrast to the changing light of the prairie behind it (scenic design by Erica Zaffarano, lighting design by Mike Grogan). Paula Post's costumes evoke the period and help make the transition from and back to present day.

Before experiencing the magical opening night of Sweet Land, the Musical, I had seen four readings of it. I couldn't be more thrilled for and proud of the all-female and mostly local creative team for making it to this new beginning for Sweet Land. And there's no better place for it to premiere than at the History Theatre, which throughout its history has been dedicated to developing new works, particularly those that tell the untold stories of all Minnesotans. It's so important to hear stories and histories that are different from our own, and learn that they really aren't that different in the ways matters. But it's also wonderful to experience what feels like your own history, your own family story, being told in such a beautiful and moving way. I think this is a story that many Minnesotans will relate to. And even if this isn't your specific story, most of us are descended from immigrants, with stories known and dear to us, or unknown and only imagined. We can only "hope what came before us, was a story born of love."

Sweet Land, the Musical continues through May 28 at the History Theatre in downtown St. Paul.