"Refugia" by the Moving Company at the Guthrie Theater 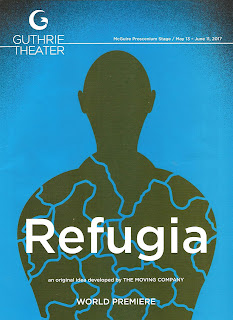 One of my favorite theater companies, The Moving Company (an offshoot of the dearly departed Theatre de la Jeune Lune), made their Guthrie debut last weekend with Refugia, after five or so years of producing new work that is interesting, bizarre, lovely, or all of the above. Several of my fellow Twin Cities Theater Bloggers* saw it opening night and had some strong reactions, to say the least. Even though I mostly stayed out of the conversation, when I saw the show last night I couldn't help but look for issues. And I did find some, although I also found some really beautiful moments and a powerful and timely message. Would I have noticed these issues if not for my friends? I don't know, but I'm grateful to them for speaking their experiences honestly and opening up a conversation. A conversation that will continue with an open forum discussing representation** in theater coming up at the Guthrie (I'll post the details when they become available). In the meantime, go see the show and decide for yourself.

The Moving Company created Refugia through a series of workshops in response to the current refugee crisis (at a talk-back about immigration after Sweet Land last weekend, a panelist said that there is more forced migration now than in any time in the history of the world!). The work is made up of eight stories about refugees, some of them interrelated. One of the most powerful is the recurring story of an Algerian couple who immigrated to France, where they had a son, and are now seeing their son pulled into the terrorist movement. The parents do anything they can to get their on back, which feels painfully real. Are parents of terrorists proud of them? Or do they want to thwack them over the head with a suitcase and yell, "you idiot, I raised you better than that!" We also follow a group of women fleeing from Syria to Germany, a scared and lost child at the Arizona/Mexico border, and a Polish couple in 1957 who are attempting to immigrate to Israel from USSR. Put together, these stories present a powerful case that we're all immigrants, we're all refugees, and we're all looking for the same thing - a safe place to call home.

Unfortunately, this beautiful and important message was muddied a bit in the telling. In a show that pushes three hours, the final comic epilogue dragged on way too long and lessened the effect of what we had just experienced. On it's own it's an amusing skit filled with the familiar MoCo silliness mixed with the profound (which I happen to adore), but in this case it didn't seem to serve the story. Another issue I had with the show is the all too liberal use of fat suits. I know that it's part of the many costumes the eight-person ensemble donned to transform into different characters, but putting padding on a woman and then making a joke about it is not the same as putting on a wig. If they wanted to show women with a range of body types, they should have cast women with a range of body types (and that goes for all of the theaters, BTW). Another thing to think about is the perspective from which these stories are being told (which my friend Laura writes about on One Girl, Two Cities).

But on the plus side, this is a really great cast that's fun to watch, including company members Steven Epp, Christina Baldwin (whose gorgeous vocals add much to the poignancy of many of the chapters), and Nathan Keepers. They're joined by the adorable young Maia Hernandez and Guthrie newcomers Jamal Abdunnasir, Rendah Heywood, and Orlando Paboty (all with powerful, nuanced performances), and Kendra 'Vie Boheme' Dennard (with the best name and a moving dance piece). You might recognize a few familiar local faces in the additional ensemble members, who add much to the story by their silent presence. Until the too long epilogue, the show is well-paced and well-staged (company member Dominique Serrand directs), with chapter titles and locations displayed in supertitles. The versatile set of steel and bare wood, with sections that open up and move around, is used to good effect (set design by Riccardo Hernández). Sonya M. Berlovitz's costumes cover a wide variety of eras, styles, and characters (but again, no fat suits please). And much of the show is filled with the poetry, music, and physical theater storytelling that the Moving Company does so well.

So there you have it, the good, the bad, the ugly. As I said to my fellow TCTB, if one of the goals of theater is to start a conversation, then Refugia is a raging success! As long as we keep making art that matters, trying new things, being open about how we feel about what we're doing or what we're seeing, and take the time to listen to each other, I think we'll be OK.

Refugia continues on the Guthrie's McGuire Proscenium stage through June 11.


*Read more opinions on this show from One Girl, Two Cities and Compendium.
**For more on representation in theater and the media see Mu's Charles Francis Chan Jr's Exotic Oriental Murder Mystery in the Guthrie Studio, and Walking Shadow's Red Velvet at the Southern, both closing this weekend.