"The Bluest Eye" at the Guthrie Theatre 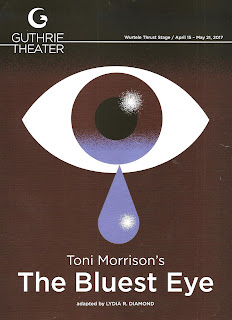 "This soil is bad for certain kinds of flowers. Certain seeds it will not nurture, certain fruit it will not bear, and when the land kills of its own volition, we acquiesce and say the victim has no right to live." This quote from Toni Morrison's 1970 debut novel The Bluest Eye, an adaptation of which is currently playing on the Guthrie thrust stage, is a brilliant metaphor for the Civil Rights movement, the Black Lives Matter movement, the Women's Rights movement, the Gay Rights movement, really any cry for equality and justice. All we want is for all kinds of flowers to have a chance to grow. What they do with that chance is up to them, but the promise of America (a promise that feels like it's slipping further away every day) is that every flower, every child, is given an equal chance to grow and flourish and become their best self. The protagonist of The Bluest Eye, a poor and "ugly" black girl named Pecola living in the 1940s, is not given that chance. This cast and creative team, most of whom are new to the Guthrie, bring Toni Morrison's story to heartbreakingly vivid life in an intense, engaging, at times humorous, and incredibly moving hour and 45 minutes of theater.

I've read some of Toni Morrison's work, but I don't think I've read The Bluest Eye, and if I did it was so long ago I don't remember. But it feels like playwright Lydia R. Diamond has lifted passages from the book and laid them bare on the stage. Characters take turns narrating the story in a way that brings us right inside the world. Sisters Claudia and Frieda (Carla Duren and Deonna Bouye, adults but as charming and adorable as precocious little girls) handle much of the narration, as they tell us about Pecola (an incredibly sympathetic Brittany Bellizeare), who is living with them temporarily. Pecola's parents (Stephanie Berry and J. Bernard Calloway, both excellent) have a volatile relationship, which is explained through flashbacks of when they met and before.

Beaten down by life, Pecola's father soon takes out his feelings of rage and helplessness on her. Pecola totes around a book about Dick and Jane, a perfect, pretty, happy white family. She prays and wishes to be white like the children in the book, like the dolls she plays with, like the people in the movies, believing that if only her eyes were blue, she would be pretty, she would be happy, she would be loved. How devastating to grow up never seeing yourself in any of the images of beauty or celebrity that permeate our culture, to grow up believing you're different, ugly, less than. Such is the life of Pecola and countless children of that era, which is why representation in media of all different "kinds of flowers" is so important.

The strong eight-person ensemble includes only two locals, Shawn Hamilton and Regina Marie Williams, and director Lileana Blain-Cruz and much of her design team are also making their Guthrie debuts. I always like to see more local talent featured, but it's also nice to be exposed to different artists, and their work is impeccable. Lileana imbues the story with life and energy, balancing the heaviness with moments of humor, and always stressing the humanity of the characters. Sequences of the cast moving in jerky repeated motions like marionettes are a bit perplexing but very affecting. I'm not sure what it means, maybe that we're all puppets in the system with no control over our lives.

The floor and the back wall of the stage look like cracked pavement with weeds, flowers, and grasses sprouting up through the cracks and around the edges, with just a few pieces of furniture - a desk or a brass bed - brought out when needed. It's sparse and deceptively simple, until it begins to rain and you realize there's some pretty complex technical effects behind the scenes. The rain matches the somber mood of the story as Pecola's situation gets worse, while moments of tender snowfall highlight special moments (scenic design by Matt Saunders).

The Bluest Eye is a classic novel by a beloved American novelist, and it's wonderful and important to see it on stage in the form of this play commissioned by Steppenwolf Theatre a little over ten years ago. We're living in a time of increasingly infertile and unfriendly soil for certain kinds of flowers, and I mostly feel helpless about it. But maybe stories like this will open some eyes or inspire us to work to make the soil more fertile. The Bluest Eye continues through May 21.