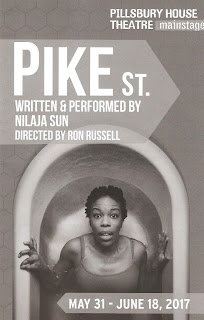 Pillsbury House Theatre is hosting New York based theater artist Nilaja Sun's acclaimed one-woman show Pike St. for three weeks, and my Minnesota theater friends - this is an opportunity you don't want to miss. A native of the Lower East Side, Nilaja brings all the beauty, diversity, community, and difficulties of her neighborhood to life in a show so all-engrossing, it's a shock to the system to be returned to reality after 90 minutes. She tells one specific story of a family in a hurricane, playing all of the different characters, but it's so much more than one family's story. It's about returning war vets, the joys and frustrations of living in a close community, the joys and frustrations of caring for a child with special needs, family, love, loyalty, and New York City - "the greatest city in the world.*" Pike St., which Nilaja also wrote, is a remarkable piece, and hers is a remarkable performance. Reserve your ticket now, it's the best $5-25 you'll spend today.

"In the eye of the hurricane there is quiet,*" and as Hurricane Sandy approaches NYC, the quiet is a 15-year-old girl named Candi who two years earlier suffered some kind of trauma that left her unable to move, speak, or breathe on her own. She's lovingly cared for by single mother Evelyn, who lives with her Papi in an apartment on Pike Street, tucked under the Manhattan Bridge. On this day, a day like every other that turns out to be extraordinary, they're awaiting the return of Evelyn's brother Manny, a war hero coming home with a silver star and a slight case of PTSD. The family works out some issues involving the death of their mother some years ago, and Papi's own traumatic return from a different war many years ago. Nothing much happens, and everything happens, as we get to know this quiet and special girl, her family, and their neighbors.

You might think there's a cast of a half dozen or so actors in this play, but nope. Nilaja becomes every one of these people so believably that you begin to wonder why more than one actor is ever needed in a play. She's a master of accents, of which there are many on the Lower East Side, a microcosm of America (go visit the Tenement Museum next time you're in NYC for more on that). She voices the elderly Jewish woman downstairs, Puerto Rican immigrant Papi, a Yemeni bodega owner, and all-American war hero Manny. But it's not just the voice, she adopts a different physicality for each character, so distinct that you come to recognize the character before they say a word by the way she holds her body or the expression on her face. Nilaja brilliantly tells this beautiful story and inhabits these many complex characters in a funny, moving, and incredibly captivating 90 minutes.

Of course a one-person show is never really just that, and Nilaja is aided in her storytelling by the lighting design (by Tyler Micoleau) which sets the tone for each scene, and particularly by the sound design (by Ron Russell, who also directs) which captures the sounds of the approaching storm, busy NYC life, and the hum of the TV in the background.

Nilaja is touring the country with Pike St., and Twin Cities theater-goers are lucky that she stopped in Minneapolis. Go see this beautiful, brilliant, funny, heart-breaking performance before she leaves town. It's a wonderful example of the art and beauty of theater and performance.


*Please indulge my many Hamilton quotes in the next few weeks, I just saw it for the 3rd time so it's on my mind even more than usual.