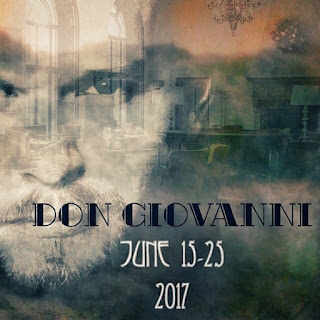 For five years, I spent one or two nights at Concordia University's E.M. Pearson Theatre watching opera/operetta/musical theater as part of Skylark Opera's Annual Summer Festival. Last year, the festival was abruptly cancelled as the company went through financial and leadership challenges. I'm happy to report that Skylark is back, rebranded as Skylark Opera Theatre, now with their second show under new Artistic Director Robert Neu. The Summer Festival has not returned, but Skylark's commitment to presenting accessible opera in English hasn't changed. Their second production (after The Tragedy of Carmen earlier this year) is a site-specific production of Mozart's Don Giovanni, with new English translation by Robert Neu and Gabriel Preisser, who also plays the title character. It bears more than a little resemblance to last summer's site-specific Mozart (The Marriage of Figaro in the James J. Hill House) by Robert Neu's other company, Angels and Demons Entertainment, a co-producer of this show. Like Marriage of Figaro, this Don Giovanni is an intimate, immersive experience that one doesn't usually get with opera.

Not being much of an opera-goer, I once again was unfamiliar with Don Giovanni before seeing Skylark's production (not counting Mixed Precipitation's odd and delightful mash-up/satire Donald Giovanni in Cornlandia last summer). But everyone's familiar with the legend of Don Juan, a selfish, cruel, violent man who seduces every woman he meets and kills a few of the men. This Don Giovanni is quite a bastard, and somehow continues to get women to fall for him despite evidence of his betrayal (like his pregnant ex-lover whom he abandoned). At this particular moment in time, I have very little tolerance for stories of "men behaving badly;" it seems a little too close to the reality we live in. But don't worry, Donny G gets his in the end, and it's quite satisifying.

Skylark has set the story in Prohibition Era America, with Don Giovanni as the owner of a speakeasy called Donny G's. The new translation feels modern and clearly tells the story. As in Marriage of Figaro last summer, we follow the cast to four different locations around the Woman's Club of Minneapolis, a gorgeous historic building on Loring Park. In addition to the actual theater space (that once was a Fringe venue), performance spaces include an elegant ballroom, a dining room (in which real food was served, only 25% of which was vegetarian and none was vegan), and the open and airy lounge overlooking the park (the last time I was in that room I was chatting with a future Tony winner). It's a beautiful building and I enjoyed getting to see more of it, but do note that it's a six-story building, and you will have to climb down and up again five flights of stairs (or take the elevator). Movement between the five scenes in the two acts does interrupt the flow of the story, like having four mini-intermissions, and makes for a long evening (three-hour total runtime). But that's a concession you make to be able to utilize the many interesting spaces in this building. Although I do wish they had given more consideration to the fact that if the cast is sitting in a chair or on the floor in some of those spaces, as they do, audience members sitting even a few rows back cannot see the actors.

But we can hear them! One of the best parts of this experience is hearing these gorgeous opera-trained voices with no amplification in small spaces. The emotions and the words are so clear and immediate, and we really feel part of the story. Music director and (I assume) accompanist Mary Jo Gothmann tirelessly keeps the music moving, and luckily there's a piano in each of these rooms. While I do love an orchestra, it's also fun to hear a more stripped-down version of Mozart's lovely opera, with just piano and voice.

The excellent seven-person cast plus six-person ensemble (who help direct the flow of traffic) are all wonderfully present in this up-close-and-personal style, often singing right to audience members. Gabriel Preisser is darkly smooth and charming as the title character; Andre Wilkowske provides comic relief as his servant Leporello; and the three strong women who fall for him (Karin Wolverton, Tess Altiveros, Quinn Shadko) are all a delight. Rounding out the cast are David Blalock and Benjamin Sieverding.

The set design couldn't be better, thanks to the Woman's Club of Minneapolis. Mike Grogan's lighting design especially comes into play with some cool flashlight effects in the theater. Samantha Fromm Haddows' yummy period costumes complete the look of the show. There is great attention to detail in making this a quality immersive experience.

Skylark Opera has always been about making opera accessible to audiences who maybe aren't regulars at the opera. With only four performances at a ticket price of $75, this does not accomplish that goal. It's a lovely evening, but a pretty exclusive one. I hope to see Skylark return to opera performances that are accessible to a wide range of audiences. I still miss the Summer Festival that often paired a musical theater classic with an opera in rep, but I look forward to watching Skylark Opera Theatre continue to evolve into its new manifestation.


Only two performances of Don Giovanni remain and tickets are virtually sold out (more info here). If you are going, be sure to get there early to find parking. There is a small lot next to the theater but it fills up quickly, otherwise drive around until you find street parking.