"An American in Paris" Broadway Tour at the Ordway Center 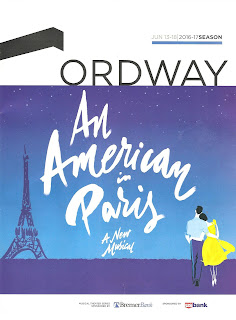 The 2015 four-time Tony-winning Broadway musical An American in Paris is currently touring the country, stopping at St. Paul's Ordway Center for the Performing Arts for just one week. Based on the classic 1951 movie of the same name, this is a movie-to-musical adaptation that makes sense. The film itself (which I admittedly have never seen) was inspired by music, George Gershwin's "jazz-inspired symphonic poem" An American in Paris, and is filled with several other of Gerswhin's songs (with lyrics by Ira Gershwin) and dancing. Lots of dancing. The stage version (with book by Craig Lucas and direction/choreography by Christopher Wheeldon) has slightly adapted the story, added and removed Gerswhin songs, and thereby turned the movie into a thoroughly enjoyable dance musical. I've heard that the reason to see this show is the dancing, but I found a few more reasons to see it. Read on to find out.