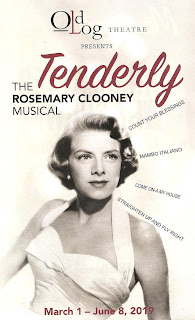 I love Rosemary Clooney. But I really don't know much about her outside of White Christmas, my favorite Christmas movie. I've seen it dozens of times, each time newly obsessed with Rosemary's performance, voice, hair, costumes. Or rather, I didn't know much about her, but I do now, thanks to Old Log Theatre's regional premiere of Tenderly: The Rosemary Clooney Musical. Bio-musicals are all the rage right now (see also Beautiful, On Your Feet, and The Cher Show), and IMO there's not a better choice for a bio-musical than the velvet voiced crooner Rosemary Clooney (except maybe for Karen Carpenter - will someone please wright a bio-musical about her?!). Bio-musicals can sometimes seem forced or showy, but Tenderly is not. It's an intimate look at the life of the woman behind the voice we know and love. With just a three-person cast and three-person band, we really get to know Rosie (as her friends called her, and after this show you will feel like her friend) at one of the lowest times of her life - her 1968 hospitalization for addiction and mental illness. But we also get to experience the high points of her career, and how she persevered through the hard times and reinvented herself. Tenderly plays through June 8 at the charming Old Log Theatre in even more charming Excelsior, so perhaps as spring comes (and it will), a trip Out West to visit this lovely and historic lake town and the oldest theater west of the Mississippi (or so I hear) would ge a good way to celebrate.

The musical, written by Janet Yates Vogt and Mark Friedman, incorporates many of Rosie's biggest hits, along with two original songs that they wrote for the show. It takes place in a therapy session during her hospitalization, as Rosie reluctantly begins to open up to an unnamed doctor about what brought her to this place. As she begins to tell her story, the actors step back in time and play out the scenes. This is where I learn more about Rosemary Clooney that I've ever known (she wrote two auto-biographies, from which I assume the creators pulled). She grew up poor in Kentucky with a younger sister and brother (whose progeny you might know). Her father was an alcoholic, and her mother and brother moved away when she was a teenager. Rosie and her sister started singing on the radio, then touring with a band, which led to Rosie's solo recording and movie career. And while my favorite Rosemary Clooney song, "Love - You Didn't Do Right By Me," is not included in the show, it could be her theme song, and the show explores her tumultuous marriage to actor José Ferrar and other relationships. With all of her troubles, she easily fell victim to Hollywood's tendency at the time to over-prescribe pills, which eventually led her to having a breakdown on stage, resulting in her hospitalization.

All of this plays out anecdotally with scenes and songs between Rosie and others in her life. Gracie Anderson plays Rosie, and while she doesn't sound exactly like her (who does?), she has a gorgeous voice and truly embodies Rosie in her spirit and her struggles. C. Ryan Shipley plays the doctor, and effortlessly transforms into too many characters to count, including Rosie's mother and sister, a priest, her lovers, and her friends Bing Crosby and Frank Sinatra. His portrayal of Bing in particular is so delightful, warm and funny and uniquely Bing. Most of the show is these two actors, and they display a wonderful camaraderie and chemistry. Rounding out the cast is Abigail Rose Sharp, aiding in the transitions and playing a character when a third person is needed.

Director Eric Morris navigates the time and location shifts well; the scenes flow smoothly from therapy session to flashback to concert and back to therapy again. The set is dominated by a three-dimensional cube representing the doctor's office, with a mod late '60s decor. As we move into the flashbacks, the actors step out of the cube and use the whole stage. The back wall is covered with images of Rosie - magazine covers, movie posters, and photos. A rack of clothing holds pieces that help differentiate the characters, often with Rosie handing them to the doctor, as if asking him to don the roles as she tells her story. (Scenic and lighting design by Erik Paulson, Costume design by Melanie Wehrmacher.)

Music Director Luke Davidson leads the swingin' onstage three-piece band, sometimes referred to as part of the show. Rosie's biggest hits, including "Sisters" (you can't do a Rosemary Clooney show without "Sisters"), "Count Your Blessings Instead of Sheep, "Come On-A My House," and "Mambo Italiano," are cleverly woven into the story, representing different phases of her life. Charming choreography (by Jaclyn Juola) accompanies some of the songs, and a short post-show concert gives us the chance to cheer for these wonderful performers.

Tenderly: The Rosemary Clooney Musical continues through June 9 at Old Log Theatre in Excelsior. It's definitely worth the drive to experience the life and music of the iconic Rosemary Clooney in this all-around beautiful production.
Share
‹
›
Home
View web version