"On Your Feet!" Broadway Tour at the Orpheum Theatre 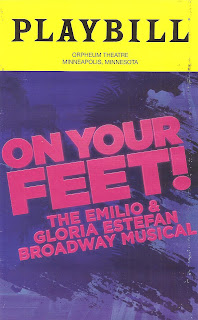 On Your Feet! The Emilio and Gloria Estefan Broadway Musical tells the story of a real-life American Dream. Gloria and Emilio immigrated with their respective families from Cuba to Miami, where they met, married, and built a pop music empire. The line that got the biggest response on opening night was Emilio telling a music exec who said they could never cross over from the Latin market, "this is what an American looks like." Even though this scene happened 30-some years ago, it's particularly poignant today. As is watching an all Latinx cast in a Broadway musical (when have we ever seen that?) as talks of a wall on our Southern border dominate the news. But I don't mean to get too political or heavy. All of the above is true, and does add resonance to the story, but On Your Feet! is also a super fun musical celebrating a music superstar and the man behind the woman. The Broadway tour is in Minneapolis for just one week, giving us the opportunity to get out of the January cold and experience the Miami heat for a few hours (click here for info and tickets, including student/educator rush tickets).

As a feminist I was a little annoyed to see this billed as "the Emilio and Gloria Estefan Broadway musical," rather than "Gloria and Emilio," because isn't she the star? But it's clear from this show that they were equal partners in what they created - Gloria was the public face of it, but Emilio worked just as hard behind the scenes. A married couple that works together in the music industry and is still married after 40 years? A rare tale indeed.

The tale begins with Gloria at the height of her fame, then flashes back to her childhood growing up in Miami, sending tapes of herself singing to her father serving in Vietnam. She meets Emilio as a teenager, who changes the name of his band from "Miami Latin Boys" to "Miami Sound Machine" to include her when he recognizes her singing, performing, and songwriting talent. The musical chronicles their relationship (they marry in 1978 and have their first child in 1980) and the trajectory of "Gloria Estefan and the Miami Sound Machine" from a local band, to a sensation in South American and the Latin markets, to American pop icon. The faced many hurdles along the way, including the aforementioned radio exec who said they would never cross over, causing them to do it themselves and prove that America, and the world, wanted to hear their pop music with a Latin beat. Their tour bus was also involved in a serious accident, and Gloria had to work her way back to the stage after a severe spinal injury. The musical ends with her triumphant return to the stage in 1991.

The musical includes 26 songs, all credited to the Estefans and the Sound Machine. Even though I wasn't a follower of the band, almost half of these songs are familiar to me, so prevalent are they in the pop culture of the '80s and '90s. Some songs are sung in context (concerts, studios), and some in character, making it a somewhat confusing mish-mash of play with music (a la Jersey Boys) and full-blown musical. The book is a little weak, but it's difficult to fit 20 years of two people's lives, plus flashbacks into their and their parents' past, into two hours. The musical covers a lot, so nothing really hits that deeply. But that didn't stop me from tearing up when Gloria sang "Coming Out of the Dark," returning to the spotlight after her accident, or jumping to my feet for the awesome "greatest hits" curtain call.

The gorgeous and talented Latinx cast features a hard-working ensemble playing multiple characters and performing Sergio Trujillo's fantastic choreography with precision. (The music and dancing is so infectious it makes me want to seek out salsa lessons.) Christie Prades is a strong Gloria, with the voice, the moves, and the emotion. Eddie Noel is new to the role of Emilio, which you would never know because he performs it with confidence and charm. The two have great chemistry and make a wonderful couple. Other highlights in the cast include Nancy Ticotin as Gloria's supportive (sometimes) mother, Alma Cuervo as her delightful abuela, and some superstars in the making in the child actors who play the young Estefans and various other children (alternating JeanPaul Medina Solano and Jordan Vergara, Ana-Sofia Rodriguez and Carmen Sanchez).

I've saved the best for last: the awesome onstage ten-piece band, over half of whom are members of the Miami Sound Machine, including Music Director Clay Ostwald. Any musical that opens with the band at center stage makes this band geek happy. Even when they disappear behind a screen, their presence is felt, and the most thrilling moments feature the band front and center. Get on your feet, indeed!

On Your Feet! The Emilio and Gloria Estefan Broadway Musical continues through January 7 at the Orpheum Theatre in downtown Minneapolis.