"She Loves Me" by Artistry at Bloomington Center for the Arts 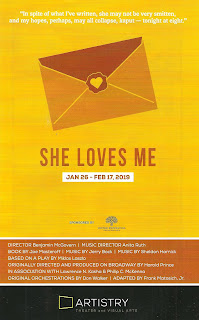 This was my third time seeing She Loves Me in under a year, and I'm not mad about it. Yes, I would prefer that the people of #TCTheater talk to each other a little more so as not to produce duplicate shows, but it happens (e.g., everyone jumping on the Ordway's bandwagon - the Guthrie producing West Side Story the year after they did, the same for Chanhassen Dinner Theatres and Mamma Mia!). If there's a musical I have to see three times in a year (OK I don't have to, I choose to, because I'm me), I'm glad it's this darling little gem of a musical. Each theater (see also Lyric Arts and DalekoArts) brings their own spin to it, and a different delicious cast. Now playing at Artistry in Bloomington, She Loves Me is definitely worth a visit, whether or not you've seen it on stage recently, or perhaps one of the other iterations of the 1937 Hungarian play (such as the 1940 Jimmy Stewart movie The Shop Around the Corner or the 1998 Tom Hanks/Meg Ryan remake You've Got Mail or the successful 2016 Broadway revival of She Loves Me broadcast live via BroadwayHD). It's a sweet, funny, charming, and relatively egalitarian love story considering when it was written.

In case you haven't seen any of the iterations of this charming story, here are the basics. Two co-workers at a parfumerie in Budapest have such a contentious relationship that you know deep down they really like each other. As it turns out, they've both been writing to an unknown someone, connected via a "lonely hearts" ad in the paper. Georg finds out first that they've actually been writing to (and falling in love with) each other, which causes him to be a bit nicer to Amalia, so that when she finally learns the truth, she realizes she knew it all along. It's a sweet love story between two strong people who know what they want and won't settle for less. We the audience know that they're perfect for each other, which makes that final resolution so satisfying.*

The story plays out with a strong 11-person ensemble (even if it skews a bit too young). Soprano Sarah DeYoung is a relative newcomer to the #TCTheater scene whom I'm happy to see again. She's a wonderful Amalia, with an effortlessly perfect voice. Ryan London Levin is a charmer as Georg, including some physical comedy, and the two have a nice chemistry. New to Artistry but definitely not new to #TCTheater, T. Mychael Rambo is a gift to the world (see also his one-person autobiographical cabaret show Present) and makes me wish Mr. Maraczek had more songs to sing. The other featured roles, each with a moment or two to shine, are well played by an effervescent Gracie Anderson as Ilona ("A Trip to the Library"), a smooth Benjamin Dutcher as the womanizer Kodaly ("Ilona"), an exuberant Michael Conroy as clerk-in-training Arpad ("Try Me"), and an elegant C. Ryan Shipley as the pragmatic clerk Sipos ("Perspective"). They're supported by a small ensemble playing customers and various other characters, including choreographer Wendy Short-Hays as the ridiculous headwaiter ensuring "A Romantic Atmosphere."

The tuneful and clever Bock and Harnick score is well played, as always, by Music Director Anita Ruth's 14-piece pit orchestra. The ensemble (and stage hands, who also get to take a bow) smoothly push the wheeled set pieces around in various formations to become the inside and the outside of the shop, as well as Amalia's bedroom, a hospital room (spoiler alert), restaurant, and various other locations. The cast is dressed in colorful period costumes. (Set design by Rick Polenek, costume design by Ed Gleeman.)

The greeting card industry tell us that this is the season of love. If you buy into that, She Loves Me is a wonderful choice to celebrate the season with a funny and charming romantic comedy. Continuing through February 17.


*Plot summary borrowed from what I wrote about Lyric Arts' production.