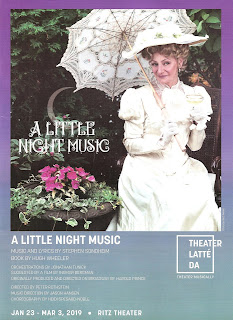 Theater Latte Da's production of A Little Night Music is pure loveliness from the moment the cast steps onstage behind a sheer curtain, warming their voices and waltzing in old fashioned undergarments, to when that same curtain falls at the completion of the story and the youngest cast member steps out gazing in wonder. As everything created by Peter Rothestein and company, it's thoughtful, detailed, well cast, beautifully staged, and musically gorgeous. Sondheim's 1973 Tony-winning musical is a charming, smart, and funny story about the perils of love and the phases of life, bringing to mind the Shakespeare quote "Lord, what fools these mortals be." And you'd be a fool to miss it.

Set in Sweden at the turn of the last century, the multi-Tony-winning musical A Little Night Music is a story about love, loss, regret, and second chances. Desiree is a glamorous actress who has left her teenage daughter to be raised by her mother in the country. Her former lover Fredrik walks back into her life after seeing her in a performance and wants to rekindle their relationship. But there's a complication. Well, several complications. Fredrik has a new young wife Anne, who has so far refused to consummate the marriage. And his son Henrik is in love with her. Desiree has a married lover, who's very jealous and possessive of both his wife and mistress. When the entire group is invited out to Desiree's mother's house in the country, much hijinks ensue, as you can imagine. Lovers meet and break up, hearts are broken and repaired, and everyone has a lovely, if bittersweet, time. This is a comedy, almost a farce, but one with an undercurrent of sadness, longing, regret, and weariness of life.*

This ten-person cast is smaller than usual; there is no separate quintet, the Greek chorus of singers. Instead that role is filled by various other characters or cast members doubling, making this a smaller more intimate affair. The quintet role seems mostly to fall to the servants Frid and Petra, characters who don't normally sing a lot - a very smart choice when they're played by Bradley Greenwald and Britta Ollmann, both of whom have gorgeous voices (and Britta is also featured on a great fun song "The Miller's Son").

The whole cast really is an embarrassment of riches, talented performers all, both individually and as an ensemble. Everybody's favorite Sally Wingert is a wonderful Desiree - smart, funny, spirited, wistful. She's well matched in Mark Benninghofen's Fredrick. Although neither are trained singers, having worked more in straight plays throughout their illustrious #TCTheater careers, they do well with the material (including the musical's most well known song "Send in the Clowns") and bring such emotion and truthfulness to their performances.

This talented ensemble also includes Grace Chermak, with a lovely voice and youthfulness as Fredrik's young wife Anne; Riley McNutt as his adorably forlorn and lovesick son Henrik; Rodolfo Nieto as Desiree's lover, the stern and demanding count; Elizabeth Hawkinson as his neglected wife who puts the plan in motion to get her husband back; Susan Hofflander as Desiree's wise and endlessly quotable mother; and last but not least, the young and charming Mabel Weismann as Desiree's daughter.

Sondheim wrote the entire score in 3/4 time, waltzes and a bunch of other words I don't know like mazurka (see the wonderfully detailed dramaturgical information in the program). It's not necessarily something you would notice, but it gives the music a unique and dreamy feel. The score is beautifully realized with a chamber music sound by the five-person onstage orchestra, led by Jason Hansen on piano, who also music directed Theater Mu's production a few years ago (and is the Twin Cities Theater Blogger's favorite music director of 2018). And of course, where there is waltz music, there is waltzing, in the form of Heidi Spesard-Noble's lovely and subtle choreography.

The whole show has a feeling of nostalgia, heightened by the sepia toned set and costumes. All of the characters are dressed in beautiful gowns or suits in shades ranging from ivory to dusty beige, until the final dinner scene when the men appear in formal black, and the women in rich jewel tones, which really pop after one's eyes have adjusted to the neutral shades. The play takes place in multiple locations, achieved by simple period set pieces in those same sepia tones, and our imaginations. The first act takes place in front of a sheer curtain hiding the onstage band. When we arrive at the country in Act II, that curtain drops, revealing not only the band but trunks of birch trees and soft greenery, accompanied by a warmer, sunnier light. (Costume design by Rich Hamson, scenic design by Joel Sass, lighting design by Marcus Dilliard - the Twin Cities Theater Blogger's favorite lighting designer of 2018.)

A Little Night Music is one of the best musicals from one of our best living composers, brought to life by one of #TCTheater's best interpreters of music-theater. Continuing through March 3 at the Ritz Theater in Northeast Minneapolis.


*Plot summary borrowed from what I wrote about TheaterMu's production a few years ago.