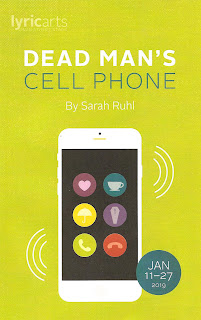 In 2007, playwright Sarah Ruhl wrote a quirky, fantastical, and painfully real play about our relationships with our cell phones and with each other. A play that seems even more relevant now, 12 years later, as smart phone technology and usage has increased. Lyric Arts' production of Dead Man's Cell Phone captures this struggle between technology and connection, and entertains with a charming six-person cast and ambitious design. This odd and amusing comedy that speaks to the world we live in officially opens tonight and runs through January 27 in downtown Anoka.

Jean is sitting in a cafe minding her own business when she hears a cell phone that won't stop ringing. She asks the phone's owner to please answer it, but when he doesn't respond, she answers it for him. Only then does she realize that the reason he isn't answering his phone is because he's dead. So begin's Jean's journey as she feels obliged to continue to answer this man's phone and speak to his friends, family, and business associates. She meets his mistress, his wife, his mother, and his brother, and helps them grieve their loss (although none of them seems that upset) as she finds out more about this man Gordon. When she eventually discovers the shady details of his business, she's in too deep to escape unscathed.*

This play is both fantastical and grounded in reality. The fantastical parts come in the visits to the afterlife, a dead Gordon talking to the audience about the day he died, and some espionage type business dealings. And while some of the characters are over the top, there's a humanity to them, especially Jean, as they navigate grief, loss, and new beginnings. Jean's interactions with Gordon's family, while at times strange, also feel very real and connected. It's an odd little play, and that's a good thing.

The wonderful six-person cast is led by Katie Strom Rozanas, who rarely leaves the stage (which maybe is why she doesn't get to change clothes like all the other characters do, although her one outfit is pretty cute boho chic, by costume designer Lucas Skjaret). She's so charismatic and likable that we happily follow her down this strange rabbit hole. Nick Menzhuber does well with his morbidly funny monologue as poor dead Gordon. Jane Burke is nothing short of hilarious as his over-the-top grieving (?) mother. Kate Beahen is also wildly funny as Gordon's wife, especially drunk on martinis, but also portrays the hurt and confusion that this woman is experiencing at the loss of the man she lived with but didn't really love. As Gordon's brother and Jean's potential love interest, Phillip Hoelscher is sweetly sad and awkwardly funny (the stationary store love scene is straight out of some warped rom-com). Rounding out the cast is Briana Boldon, intriguing and mysterious as "the other woman."

The set design is starkly simple (just two small tables and four chairs used in all the scenes), with three cell-phone shaped screens and a large grid as the only backdrops. Video and still images, or sometimes just displays of color, are displayed on the screens and set the location and mood of each scene. In a play about technology, it seems appropriate to have a tech-heavy design (scenic, lighting, and projection design by Jim Eischen). Another cool feature of the production is the original music composed by Dan Dukich, which provides a soundtrack for the story that only enhances it, never distracts from it.

In a season that began with the regional premiere of the new original musical If/Then, Lyric continues to challenge and expand their audience with Dead Man's Cell Phone, a very modern, delightfully odd comedy.


*Plot summary borrowed from what I wrote about the production at Theatre in the Round a few years ago.