"These Shining Lives" at Theatre in the Round 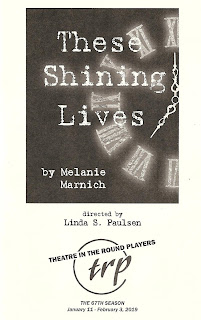 "Dip this paintbrush in radium and then put it in your mouth. Don't worry if it gets all over your skin, clothes, and hair, you'll be fine!" If any of our employers told us this today, we would all likely walk out the door. But in the 1920s, when workers had much fewer rights than we do now, if you needed the job to feed your family, and especially if you were a woman and your bosses were men, you likely would have accepted it. These Shining Lives tells the true story of women who did just that, until their hands started glowing and their bones started aching. It's because of a couple of lawsuits brought by the real life "Radium Girls" against their employers that companies are held responsible for injuries or illnesses their employees acquire on the job. Theatre in the Round tells these pioneering women's story, via a female playwright and director, with humanity and grace.

The heroine of our story is Catherine Donohue (a likable Autumn Sisson), wife and mother of two who takes a job because the family needs the extra income, and because of the sense of accomplishment, confidence, and independence she gains from earning money. She begins work painting the numbers on watches with a glow-in-the-dark substance. It's easy, fun, profitable work (they get paid by the watch), and Katie soon bonds with coworkers Frances (Gillian Mueller), Charlotte (Gretchen Nelson), and Pearl (Shiloh Zoccoli). She works through a few conflicts with her husband Tom (Austin Lewis), but since he's The Best Husband in the World, she settles into a happy life. Until after years of working at the watch factory, she starts feeling sick, for which the company doctors tell her to take aspirin. Eventually they fire her for missing work, and Tom (after initially poo-pooing her ailments, which is not Best Husband behavior) supports her in seeing a doctor and getting to the bottom of it. When the women are diagnosed with fatal radium poisoning, they bring a lawsuit against the company, only to face public backlash because this company is a big employer in the small Illinois town, and money = power. But the women prevail, even though they themselves are beyond help, and workers' rights are advanced because of their bravery.

The play is narrated by Catherine and the other women, which has the wonderful effect of them telling their own story. The large cast is fun to watch and work well together under director Linda S. Paulsen. Between scenes, singer Helene Daye performs period songs that start out light and fun, and get darker as the story does. The in-the-round space is set up with the factory on one side, Catherine and Tom's home on the other, which makes for easy transitions between the two. Both spaces are filled with period appropriate details. Clothing and wigs transition from a fun flapper style to the more somber depression era garments. (Set and prop design by Abbie Krohn and Sadie Ward, costume design by Mickey Foley.)

One of my favorite genres to read is historical fiction (I'm currently immersed in the world of 18th Century America via Outlander), and I also love seeing plays that transport me to another time and place, and give insight into a real historical event through the imagined lives of the people who lived through it. These Shining Lives is one such example of this type of edutainment, shining (pardon the pun) a light on these real women's story in an engaging way.

These Shining Lives continues through February 3 at Theatre in the Round in the West Bank neighborhood of Minneapolis.