"The Father" at Gremlin Theatre 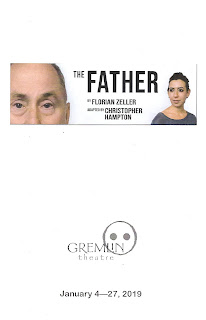 After a nearly two-week hiatus (during which I wrote about my favorites of the 200-ish shows I saw in 2018), I returned to the theater on Friday night. It was good to be back doing my favorite thing, and Gremlin Theatre's production of The Father was an excellent way to start 2019, setting the bar quite high for all the shows to follow. A smart and twisty script (adapted by Christopher Hampton from French playwright Florian Zeller's original), an excellent six-person cast, thoughtful direction, and meaningful design. Subtitled "a tragic farce," this story of a man descending deeper into dementia is so sad to watch, but beautiful and amusing at the same time. Start your year of theater at Gremlin and you won't be disappointed (continuing through January 27).

This piece puts the viewer into the mind of someone with dementia better than anything I've seen. We see the world from Andre's perspective as his world slowly starts to disappear. His daughter, Anne, decides to move him into her place when he insults yet another caregiver. And she may or may not be moving away from Paris to London, and she may or may not be married. As Andre's mind gets more jumbled, so does the play. We see a conversation play out, then in the next scene someone tells Andre that it didn't happen. He's confused; so are we. A character we know from previous scenes walks on stage played by a different actor. Andre doesn't recognize them, even when they tell him their name; the audience is in the same boat. Things that we think are true may not be, as scenes overlap and turn back in on themselves. It's difficult to know what's going on; at times I even thought maybe it's true that everyone is gaslighting Andre just to get his beautiful Paris flat. But in the end it's clear - this is what dementia looks like from the inside, or one at least one playwright's imagining of it.

While this is happening, as pieces of Andre's memory and identity are slipping away, pieces of the set are also disappearing - his favorite leather chairs, the charming fainting couch, the bar, even the large abstract painting that dominates the room. Eventually nothing is left, just an empty set and Andre's empty existence. So very sad.

Craig Johnson plays all the sides of Andre - his charm when meeting a new person, his distrust of his daughter, his longing for his other daughter (the one he loves), his confusion at what is happening, his terror when mistreated. Craig is all of these things and more, and carries the audience along on this sad journey. Miriam Schwartz is also wonderful as the daughter trying her best in an impossible situation. The strong ensemble (Emily A. Grodzik, Matt Wall, Peter Christian Hansen, and Olivia Wilusz) play multiple characters, sometimes the same character, keeping the audience on our toes as they know who they are, even when we don't. Director Ellen Fenster does well with the tricky script, keeping things as clear as they should be, but letting the uncertainty of the situation come through. Scenes are punctuated with dramatic lighting and stillness, adding to the tension of the piece (set and lighting design by Carl Schoenborn).

The Father is just all around beautifully done (including the casual chic costumes by Mandi Johnson, similar and sometimes overlapping between the actors playing the same character). And Gremlin's intimate thrust stage in Vandalia Towers is the perfect place to stage this intimate story. It's good to be back at the theater, and Gremlin is a great place to start the year. If you're so inclined, you can pay a visit to Lake Monster Brewing in the same building (food trucks often available), and even bring your beer into the theater. And then maybe cry into it.

The Father continues through January 27.