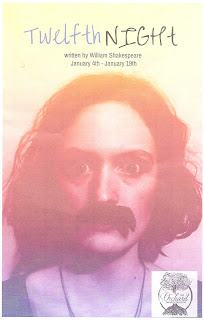 New #TCTheater company Orchard Theater Collective, founded by a quartet of U of M/Guthrie BFA grads, has brought us some interesting and innovative shows over the past year or so. They continue that tradition with Shakespeare's comedy Twelfth Night, a clever choice to stage in early January when this actual holiday (aka the 12th day of Christmas) falls. And they've made it feel like a holiday. What is essentially a church basement theater has been transformed into a warm, cozy, festive space with lights and colorful decorations, as well as drinks and a lovely spread of cheese, hummus, bread, and cookies, all included in the price of admission. The intrepid cast of eight brings many more characters to life in this gender-swapping mistaken identity romantic comedy, performed on the small stage and in a square in front of it, with the audience sitting at tables on three sides. This Twelfth Night is playful and fun, an evening of pure frivolity. Fortunately this show runs a little longer than their previous shows (sometimes one weekend only); you have until January 19 to celebrate Twelfth Night with Orchard Theater Collective (click here for info and tickets).

If you, like me, have a tendency to get all your Shakespearean romantic comedies confused, here's a brief reminder. Twelfth Night is the one with the shipwrecked male and female twins who are separated, each thinking the other is drowned. Viola (Anna Leverett) decides to disguise herself as a man, as one does in such situations, calling herself Cesario and going into service for the Duke Orsino (Kevin Fanshaw). On his behalf she woos the mourning Olivia (Shae Palic), who wants nothing to do with the Duke but falls for young Cesario, who in turn is in love with the Duke. Viola's twin Sebastian (Corey DiNardo) shows up later causing much amusing Shakespearean confusion. Meanwhile, Olivia's handmaid Maria (Ellen Apel), her kinsman Sir Toby the buffoon (Foster Johns), and his equally ridiculous friend Sir Andrew (Mackenzie Elker) play a cruel trick on another member of her household, Malvolio (Ben Shaw), using his love for Olivia to humiliate him. It's all tied together with music, "the food of love," and in the end everyone lives happily ever after as true identities are revealed.*

Co-directors Craig Johnson (currently on stage in Gremlin's The Father) and Damian Leverett have created a fun and playful atmosphere for their cast, and an interpretation of this 400-year old comedy that feels fresh. The cast walks through and around the audience, occasionally speaking directly to us, giving the play a loose and casual, although still composed, feel. Fun, playful, casual - just like Shakespeare was meant to be. This is a play that references music frequently, and Orchard Theater has fulfilled that with a delightfully odd selection of pop songs plus a little fiddling from Viola/Cesario.

The decoration of the space is so charming I couldn't stop admiring all of the details. Yarn is used in creative ways, including little braided dolls on the table and a hanging chandelier over the buffet table. Instead of streamers, strips of colorful cloth are tied on a string that's draped across the ceilings and walls, along with strings of lights. Candles on the tables continue the warm and glowing feeling of the room. With the look of the space (designed and decorated by Mackenzie and Kristi Elker) and the free food (supplied by The Wedge Co-op) and drinks (sponsored by Fulton Brewing), Orchard Theater has really succeeded in making this feel like a celebration among friends, instead of a formal night at the theater.

The most famous line from Twelfth Night (along with "Some are born great, some achieve greatness, and some have greatness thrust upon them," which is done very tongue in cheek) is "if music be the food of love play on." Orchard Theater's production includes music, food, love, play, and a great sense of merriment and celebration. Click here for details on the remaining six performances and to purchase tickets (including show, food, and drinks) for a very reasonable $25.

*Plot summary adapted from what I wrote about Theater Mu's production a few years ago.