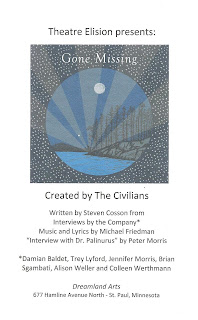 The Twin Cities Theater Bloggers gave new-ish #TCTheater company Theatre Elision the "Under the Radar" award for 2018 (read all the awards here). It was less than two years ago that they debuted with an original musical Ragtime Women in the intimate Dreamland Arts space in St. Paul. After nearly a dozen small cast, one act, original or rarely done musicals at small venues around town, they return to Dreamland Arts with another such piece. Gone Missing was created by NYC based theater company The Civilians, including playwright Steven Cosson and composer/lyricist Michael Friedman. The Civilians also created The Abominables at Children's Theatre, premiering shortly after Michael's death from AIDS shocked the theater world. I'm a big fan of his music (see also Bloody Bloody Andrew Jackson), so I'm grateful to Elision for bringing us this piece. Gone Missing is a funny, quirky, poignant little musical about all things lost, as always beautifully performed by the cast and band.

Gone Missing was originally performed by a cast of six women and men, but Elision has chosen to cast just four women, which fits with their theme of mostly or all female casts and creative teams. These four women (Emily Dussault, Christine Wade, Vanessa Gamble, and Abilene Olson) play multiple characters who were interviewed by The Civilians company, talking about things that they've lost. It could be a ring, or a job, or a pet, or a shoe, or an island. Some characters appear just for a moment, some return multiple times through the piece, including a scholar talking about the lost island Atlantis, and someone who's called in to remove bodies DOA. Songs are woven into the scenes and also speak to the idea of loss, related to the scenes but not directly. In that way the piece is more like a song cycle about missing or lost things, connected with short vignettes on the theme. Some stories are funny, some are sad, and all evoke that feeling in the pit of your stomach when you realize you've misplaced something that's important to you.

The 80-minute show (another thing I love about Elision - no intermission!) includes nine songs of vastly different styles. Some have a more rock feel (that definitely remind me of Bloody Bloody Andrew Jackson), some more pop, some ballads, and there's a lovely Spanish guitar number, and an almost operatic song in German. All sound great performed by this talented cast (either unmiked or with handheld mics) and the three-piece onstage band under music director Harrison Wade. Each member of the cast has a solo or two to shine, in addition to the lovely harmonies. Director/designer Lindsay Fitzgerald uses the space and the four chairs well to differentiate the stories and create separate little scenes that all flow together.

Gone Missing continues this weekend and next, your chance to see TCTB's 2018 Under the Radar pick. Tickets are just $25, or $35 including a donation to the Michael Friedman Legacy Fund.