"The Children" at Jungle Theater 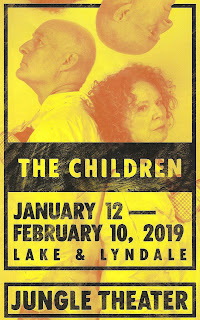 The Jungle Theater produced some of my favorite work in #TCTheater last year, and they're showing no signs of stopping that trend in 2019. Their first show of the year (my fifth, but who's counting), is the first post-Broadway production of The Children by Lucy Kirkwood (not to be confused with the re-imagined Medea play The Children by Michael Elyanow produced by Pillsbury House a few years ago). In a pre-show speech by Artistic Director Sarah Rasmussen (who has only made the Jungle better in her short tenure), she said that this team of actors, designers, and director are a master class of putting together a piece of theater. I couldn't agree more. Everything about this play is impeccable, from this very specific design that transports the audience to a seaside cottage after a nuclear disaster, to the three-person cast of beloved veterans of stage and screen, and everything else that allows this magic to happen. Get yourself to Uptown (as much of a pain as that sometimes is) to see this brilliant work of theater that will leave you contemplating life for days to come.

The entire play takes place in one room in a cottage by the sea, somewhere in England, beautifully rendered by set designer Chelsea M. Warren. It looks shabby and comfortable, exactly the kind of place I'd escape to after a nuclear disaster at the power plant. Which is what happened in the world of the play; the escapees are retired nuclear engineers Hazel (Linda Kelsey) and Robin (Stephen Yoakam). Power is limited to the evenings, the downstairs toilet overflows if you do a number two, but Hazel and Robin are making some kind of a life far enough away from the disaster to be safe (they hope), but close enough so that they're still part of the community and land where they've spent their lives. Enter Rose (Laila Robins), a friend and coworker they haven't seen in 38 years. What exactly Rose is doing there, and her past relationship with the couple, unfolds over the course of the hour and 45 minutes (no intermission). I won't spoil the details for you, but let's just say things get real complicated real fast. And decisions need to be made about to do with the rest of their lives - live peacefully eating salad, feeding the cows, and practicing yoga, or sacrifice for "the children."

The best kind of theater combines the personal with the political, and The Children does that well. The political comes in exploring issues of nuclear power, limited resources, and our responsibility to take care of each other and the planet. The personal comes in this very specific story of these three people with a complicated history and a long life of which we only see a slice, yet it's enough to know who these people are. All of them are at times unlikable and at times sympathetic; they're real and messy, and so are their lives. It's hard to know who to root for, because they're all trying to do what they think is right in balancing their personal desires with their political responsibilities.

It's refreshing to see an age appropriate love triangle among grown-ups, especially with grown-ups this wonderful. Linda Kelsey and Stephen Yoakam are favorites of the #TCTheater stage for a reason, and Laila Robins (a St. Paul native with a long IMDb page, last seen locally in the Guthrie's magnificent Lion in Winter) fits right in. They're all so believable as these characters, so specific in their choices, it's a joy to watch the three of them in anything, but especially in something this well-written and layered. They and director Casey Stangl bring this beautiful, funny, poignant script to life.

In addition to the very detailed cottage set, the sound (by C. Andrew Mayer) and lighting (by Marcus Dilliard) design also help create this specific world, with the crashing of the waves and the darkening room, until the power comes on to shed more light on things. And watch for some cool and surprising effects involving water and blood (not that you can miss it).