"The Lion in Winter" at the Guthrie Theater 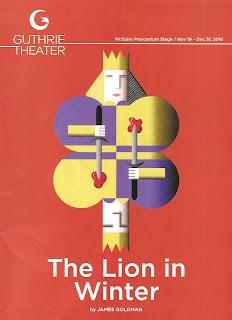 There's no family more dysfunctional than the British monarchy. I've been hearing a lot about them recently through Shakespeare's history plays Henry IV Part I, Henry V, and Richard III. The Lion in Winter takes place a few centuries and generations before the earliest of these plays, but was written in 1966 by James Goldman, so it has a more contemporary feel. The family of Henry II on Christmas of 1183 is about as dysfunctional as it gets. And while hopefully our family members don't imprison, threaten to kill, and raise armies against each other, we can all relate to that awkward holiday dinner that goes awry. This contemporary and relatable feel, along with a truly fantastic cast of local and national talent, sharp direction, and a stunning set, make the Guthrie Theater's production of The Lion in Winter a highly entertaining evening, and a spicy counterpoint to the sweet fare across the hall.

King Henry II releases his wife Eleanor of Aquitaine from prison, where he sent her when she rebeled against him, just in time for Christmas. Also at the royal castle are their sons Richard, Geoffrey, and John (each of whom wants the throne), their ward and Henry's mistress Alais, and King Phillip II of France, Alais' brother. Henry wants John to be king after him, while Eleanor favors Richard, leaving poor Geoffrey on his own, and everyone schemes, plots, and manipulates to get what they want. Deals are made and broken, annulments and marriages are planned, family members are locked in the dungeon, and murders are threatened. If you want to know what happens with the rebellions and succession, read Wikipedia, because The Lion In Winter leaves things unresolved as Eleanor heads back to prison and the boys continue to vie for the throne. But what a fantastic ride through a few days in history(ical fiction).

Although the action takes place over 800 years ago and the play was written 50 years ago, it sounds as if it could have been written today, with bitingly funny lines:

These lines, and more, are beautifully delivered by the cast under director Kevin Moriarty of Dallas Theater Center in his Guthrie debut. Minnesota actor and veteran of stage and screen Laila Robins last appeared at the Guthrie in the early 2000s (just before I became a subscriber), and returns home to give a phenomenal performance as Eleanor. What a rich and layered role is this complicated woman, running the gamut of emotions, and Laila hits every note. Equally strong and regal as her Henry is Broadway actor Kevyn Morrow, fresh from the recent revival of The Color Purple. Their three sons are played by U of M/Guthrie BFA alums (aka the Guthrie farm team) Torsten Johnson, Michael Hanna, and Riley O'Toole, each one of them a delight to watch. Rounding out this most excellent ensemble are David Pegram as Phillip and Thallis Santesteban (another U of M/Guthrie BFA alum) as Alais.

Another star of the show is the massive rotating wooden tower that dominates the stage in the McGuire Proscenium. Often they have the curtain up so you can see the set as you walk in, but for this show the red velvet curtain is lowered, which makes for a delicious reveal at showtime. Tony-winning designer Beowolf Boritt has created this towering structure that looks ancient and regal, with hundreds of candles lighting the upper portions. It can be rotated so that it serves as a backdrop for the action at the front of the stage, and then rotated so we see the back side of the tower with open rooms on varying levels, some so high I had to lean back and rest my head on the chair in my front row season seat (not a bad way to watch theater). And one more surprise - the dungeon rises up from the floor. Completing the royal medieval look are the luscious costumes, including elaborate gowns, heavy fur capes, and crowns, by Karen Perry (also making her Guthrie debut, with many credits at New Jersey's Two River Theater and Dallas Theater Center).

It's always fun to listen to what my fellow audience members are saying as we ride that long escalator down from the theater and back to the real world. After The Lion In Winter I heard "a rockin' good play," and "that's the most enjoyable play I've seen in a while." I have to concur. It's a classic play, one that feels contemporary, smart, and funny, with a thrilling new production that features a brilliant cast and stunning design. The overall experience was almost as yummy as my pre-show dinner at Spoonriver.