"Henry V" by Theatre Pro Rata at the Crane Theater 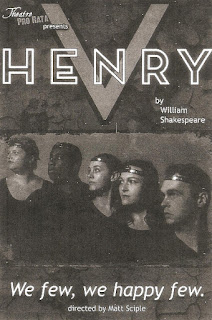 I recently wrote, "I should just give up seeing anyone else do Shakespeare, because no one does it like Ten Thousand Things." Of course that's not very realistic for a theater blogger; Shakespeare is still one of our most produced playwrights. But lucky for me, Theatre Pro Rata's new production of Henry V borrows a few things from TTT, namely a small cast, an edited story, and a playful spirit. They use just five actors to play the two dozen or more roles, and what's even more interesting - each actor takes a turn playing the title role. It's all done in a meta theater style in which five actors attempt to tell this epic story and realize just what they're up against, congratulating each other at the end when they accomplish the task. And accomplish it they do, in what is a new and inventive take on a very old play.

Shakespeare's history plays must be in vogue in the Twin Cities right now, this is the third I've seen in a little over a year. Henry V is chronologically placed between the other two I've seen recently: Henry IV Part I (Ten Thousand Things), which focuses on Henry V's father and in which Henry V is portrayed as a kind of a frat boy prince, not ready to be king; and Richard III (Theater in the Round), which takes place 70 years and about four monarchs later (it's complicated). Here we see Henry V inherit the throne from his deceased father, and try to become worthy of it by warring with and attempting to win France for England. Gone is the playboy of Henry IV, this Henry V emerges as a hero and leader.

Throughout the storytelling, the crown is literally passed between five strong actors (Becca Hart, Gabriel Murphy, Meredith Kind, Ricardo Beaird, and Victoria Pyan), sometimes reluctantly, sometimes enthusiastically. Each has a turn in portraying the King, and each brings their own spin to the character of Henry, while still maintaining consistency of character. Dressed in simple, earth-toned Depression-era suspenders or long skirts, the ensemble members play all of the characters, signified by a change of accent and addition of an accessory. These accessories are picked up from around the set, which is dominated by three bulletin boards covered with pinned papers that made me want to take a closer look (costume design by Samantha Kuhn Staneart, scenic and prop design by Ursula K Bowden).

As is usual for my first time experiencing a Shakespeare play, I had a bit of a hard time following all of the characters and events, and my ear had a bit of a hard time switching from one accent to another. Yet I was able to follow the gist of the storytelling and the spirit of war, brotherhood, and hard-won victory, thanks to the clear direction (and, I assume, adaptation) by Matt Sciple. And it's fun to recognize phrases such as "once more unto the breach" and "we few, we happy few," which once again reminds me of how many of our common English idioms come from Shakespeare, and how much he has shaped our language and theater.

This original and inventive Henry V continues through November 20 at the new Crane Theater in Northeast Minneapolis.