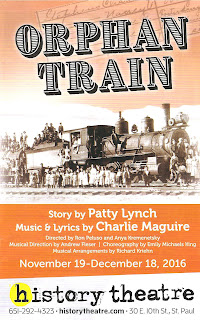 The History Theatre excels at telling often unknown Minnesota stories, as they did in 1997 with the original musical Orphan Train. At the time, most people hadn't heard of the so-called orphan trains, in which from 1858 to 1929 some 200,000 children were sent west from the East Coast to new homes across the country. The recent New York Times best-selling book Orphan Train has brought more attention to this fascinating bit of American history. Perhaps that's why the History Theatre is bringing back Orphan Train this season. The musical tells fictional stories of orphan train riders based on real events. While it's a bit cheesy and, well, Disney (for lack of a better word), the stories and music brought a tear to my eye on more than one occasion. The wonderful ensemble of seasoned pros and children alike, the excellent folk/Americana score played by a sparse but lovely orchestra, and the moving stories about immigrant orphan children in search of a home is a very affecting combination.

The play begins on the streets of New York City, where crowds of children do whatever they need to do to survive (reminiscent of Oliver! or Newsies). The Children's Aid Society soon rounds them up and puts them on a train heading west, including a newly orphaned brother and sister, the mischievous ringleader Aloysius, and his obvious love interest Sally Ann. A few children get off at every stop, until we reach the town where our story, but not the train, stops. The brother gets adopted by a stern but kind German couple while his sister moves on and eventually finds a home with the "spinster" Aid Society volunteer (I wonder how difficult it was for a single woman to adopt at that time). Sally Ann moves in with a family to care for the ailing mother, while Aly is taken on by the local deputy, who it turns out is horrifyingly, unnecessarily cruel (he makes Negan look easy going). The second act follows the kids as they adjust to their new lives and the stigma and hardships that go along with being an immigrant orphan. Not all stories have a happy ending, yet there's a feeling of hope as these children go forth to find their way and make their lives in America, nation of immigrants.

I very much enjoyed this score, with rousing group numbers balanced by quieter ballads. The cast and orchestra sound great under music director Andrew Fleser, leading the four-person band that also includes guitar, bass, and fiddle/mandolin, a winning combination to my musical tastes. I only wish they were visible onstage rather than behind the set, but that may be just this former band geek's obsession with musical theater orchestras. Emily Michaels King's choreography is lively and youthful, well performed by the large and enthusiastic cast. Gunther Gullickson's clapboard set has plenty of space to play with multiple levels, stairs, ladders, and a sliding barn door.

This truly is an ensemble piece, with no one star outshining the other. Our central couple is played by a couple of up-and-coming young actors - Ryan London Levin and Devon Cox, both charming and charismatic and together a winning couple (despite a weird storyline twist at the end). The very young actors playing the kids (many of whom already have Guthrie or Children's Theatre credits under their belt) are so talented and so stinkin' cute, I almost wish I could adopt one (or all) of them. As the brother and sister, Peder Lindell and Maia Hernandez are particularly strong and sympathetic. The kids are surrounded by talented vets such as Peter Thomson, Norah Long (with one particularly touching duet with Maia), T. Mychael Rambo (so warm as an adoptive father with such a powerful voice, I wish he could adopt me!), and Terry Hempleman (reprising his role from the original production as the cruel deputy, or as one woman who had seen the original version said in the post-show talkback, "I can't believe that same horrible man is back!" Terry does horrible good).

Thanks to the talented cast, the beautiful score, and the moving stories, Orphan Train has a ton of heart, although it's not without darker moments - not all orphan train riders found happy and loving homes. The overall effect is uplifting and inspiring (if a bit heavy-handed in that message). This is a personal story to many in the region; many descendants of orphan train riders still live here and are likely to see the show and watch their family's story play out before them (in my own family, the mother of one of my Dad's cousins came to Minnesota on an orphan train).