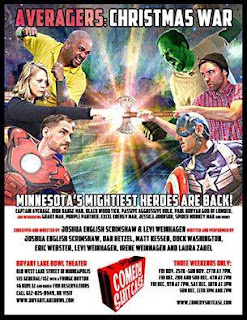 Last year's smash hit Fringe Festival show The Averagers returns with a Christmas special, because 'tis the season. Our favorite average people turned superheroes are back, and while the show may not have anything to do with Christmas (other than one scene that takes place in the Target Christmas aisle, a scary place indeed), it is hilariously funny, family friendly, chock full of local references, only an hour long, and a whole lot of fun.

Once again, the Averagers consist of Captain Average (Eric Webster), the spoiled boy-god Paul Bunyan (Joshua Scrimshaw), the single mom Black Wood Tick (Laura Zabel), office supply billionaire Iron Range Man (Levi Weinhagen), and passive aggressive Bulk (Matthew Kessen), with their adventures narrated by a guy named Stanley (Daniel Hetzel). Since we last saw them, traveling through time and saving the world from Nazis, they have been fighting evil and accidentally destroying Minneapolis parks along the way. The last straw is when they are forced to destroy Minneapolis' most beloved sculpture, the Spoonbridge and Cherry (oh no!), because it has turned into a monster (Duck Washington). The head of the parks department wants the Averagers to work for him, which causes a split in the group. Both sides try to recruit new members, which is an excuse for several more crazy average superheroes, like the man who was bitten by a spider monkey (and many other animals) at Como Zoo, Grant Man, Purple Panther, and Target Guy. The Averagers finally all come back together in an epic slow-mo battle, which also includes Black Wood Tick's daughter (scene stealer Irene Weinhagen, Levi and Laura's daughter).

The Averagers: Christmas War doesn't really have anything to do with the holidays, but it has everything to do with being silly, local references, and laughing until you cry. Check them out at Bryant Lake Bowl weekends through December 11 for a crazy fun time (my fellow morning people will be pleased with the 7 pm showtime and one-hour runtime). Also check out what my fellow Twin Cities Theater Blogger Laura at One Girl, Two Cities has to say about the show.