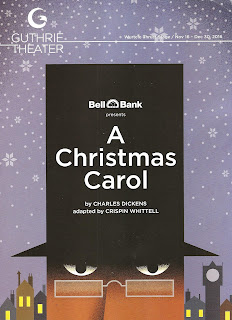 A rich, greedy, selfish old man with no regard for his fellow human beings, especially those that are different from him, that are suffering, that could benefit from a little kindness. Why is it that the story of Ebeneezer Scrooge seems so familiar? It must be because this is my 11th time seeing The Guthrie Theater's gorgeous, lively, and warm-hearted production of A Christmas Carol. And I never tire of seeing it, because Charles Dickens' story of redemption, community, family, and human kindness never gets old. It's a beautiful and necessary thing to be reminded that "what brings us together is greater than what drives us apart." That it's never too late to change, to grow, to become a kinder and more generous person. In today's current environment when there's so much division among us, so much violence and ugliness, A Christmas Carol shows us how good humanity can be.

The Guthrie has been doing A Christmas Carol for over 40 years, but it's morphed over the years. This year's production is similar to recent years - the same succinct and dynamic adaptation (by Crispin Whittell), the same spectacular sets (by Walt Spangler), the same delicious Ivey-winning costumes (by Mathew J. LeFebvre), and the same energetic and fast-moving choreograpy and direction (by Joe Chvala). Much of the beloved cast returns, but with some new faces that make this cast of over 40 children and adults a decidedly more diverse cat that's more reflective of the community we live in. A change that makes this A Christmas Carol feel more modern and immediate than ever, a change that's necessary in this post-Hamilton world.

This show is really two hours of highlights; there's not a dull moment or a weak spot to be found. But here are a few of the things I love about A Christmas Carol.

Mostly what I love about A Christmas Carol, and why I (and many people) keep returning year after year, is the feeling of hope, joy, and faith in humanity that it gives me. And it seems the cast, crew, and creative team feel the same, which is probably why so many of them also return year after year. I'll leave you with a few quotes from the playbill, which includes several nice articles about the show and the people behind it.

Nathaniel Fuller (ensemble): "I believe that theater is about illuminating the human condition. And, to me, A Christmas Carol is about what it means to be truly alive. If you shut yourself off from being generous with other people, the way Scrooge does, you lose a huge part of what life can mean."

J.C. Cutler (Scrooge): "If I believe nothing else, I believe in the power of redemption and transformation, and Scrooge is a towering example of that... we keep returning to this story every year because it helps us regain a toehold in gratitude and humility and a connection with every member of the human race. Every one."

Joe Chvala (director/choreographer): "It's a gift to be able to look at how we got here, where we are and what we might change to create a more deliberate and positive future. There is a deep-seated yearning for patient transformation in this story of a frozen man, and then the promise of life springing back from the coldest of places, whether that's a physical landscape or the human heart."

A Christmas Carol continues through December 30.