"105 Proof; or, the Killing of Mack 'The Silencer' Klein" by Transatlantic Love Affair at Illusion Theater 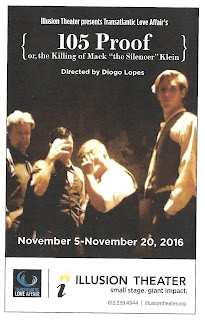 Since being mesmerized by Ash Land at the 2012 Minnesota Fringe Festival, I've been a loyal follower of Transatlantic Love Affair, the physical theater troupe that casts a spell and weaves a dream by using nothing but their bodies, voices, hearts, and souls to tell stories. Their subjects are typically very loose retellings of fairy or folk tales (Cinderella in Ash Land, Little Red Riding Hood in Red Resurrected, the legend of the Selkie in The Ballad of the Pale Fisherman), but recently they've developed original stories including the memory play These Old Shoes and the modern-day love story emilie/eurydice. Most of their shows premiere at the Fringe, but thanks to their partnership with Illusion Theater, they, and we the audience, often get a chance to revisit the stories in a slightly expanded version. Such is the case with 105 Proof; or, the Killing of Mack "The Silencer" Klein, which debuted at the 2015 Fringe. 105 Proof is another original story, but one with a decidedly different tone than their other work. The tale of a small town boy who becomes a Chicago mobster in the Prohibition era is darker, grittier, more suspenseful, and also funnier than their usual dreamy tales. But what's not different is the way the cast (most of whom were in the original production) and live musical soundtrack create an entire world of the imagination that feels real and all-encompassing.

Conceived and directed by TLA co-founder Diogo Lopes and developed by the ensemble, 105 Proof tells the story of a young man named Jonathan through his older self looking back on his life. From a simple life working at the country store with his little brother Sammy, his mother, and his grandfather, Jonathan's discovery of his grandfather's moonshine still, and his ever rising ambitions, lead him deeper and deeper into the Chicago crime scene, eventually bringing violence and destruction back to his home town. At times we see the older and younger Jonathan (played by Eric Marinus and Nick Wolf, respectively, who look like they could be the same person) observing the action, stepping out for a moment to see what he has wrought. The two very different worlds of the small rural town and the big city are beautifully and specifically brought to life by the excellent eight-person cast (also including Allison Witham, Amber Bjork, Derek Lee Miller, Emily Dussault, Heather Bunch, and Nick Saxton), many of whom play completely different characters, one in each world, one sweet, the other terrifying. I was particularly impressed with Allison's transformation from the sweet limping innocent friend of Sammy's to the chain-smoking, unpredictable, and truly scary mob boss. Barefoot, in simple neutral costumes, each cast member excels at specific individual character creation, while also coming together as an ensemble to play pieces in the whole cohesive creation.

Transatlantic Love Affair is incredibly inventive in the way that they create the environment for the story using physicality. Highlights include:

In addition to physicality, music is also an essential part of TLA's storytelling. Dustin Tessler on electric guitar and Adam J. Patterson on percussion create a soundtrack that's so organic to the story you almost forget they're there. The cast also joins in singing a couple of period-appropriate songs, led by Emily Dussault.

There are other companies in town that play with the physical theater style, but none so consistently and effectively as Transatlantic Love Affair. They truly are unique in what they do, and have really perfected the style over the last several years, but yet continue to grow and expand their storytelling style. I always feel that words are inadequate to describe what they do; it's just something you need to experience yourself. TLA is must-see viewing for a Twin Cities theater fan, and once you get a taste, you'll be hooked. Check out 105 Proof at Illusion Theater on Hennepin Avenue in downtown Minneapolis through November 20 (half-price tickets available on Goldstar), and watch for TLA's Guthrie Theater debut early next year with a new work that "re-imagines the story of Hansel and Gretel as a tale of immigration."