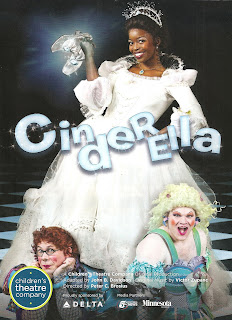 Two weeks ago I was invited to a backstage tour for bloggers at Children's Theatre Company, where they were busy preparing for the third production of their original adaptation of Cinderella, previously seen in 2009 and 2013. Along with my fellow Twin Cities Theater Bloggers Kendra (Artfully Engaging) and Tracy (What Stirs Your Soul), two other bloggers, and three lucky children, I was led through all of the backstage departments where they were hard at work creating everything from chandeliers to wigs to glass slippers. It was a truly eye-opening experience to witness up close and personal what goes into creating a show this big. It was also wonderful to witness the passion and dedication that all of the artists have for their job, making sure that the show is the best that it can be for the many children (and grown-ups) who will come to see it. The highlight of the tour was a visit to the rehearsal room, where director Peter Brosius and choreographer Linda Talcott Lee were leading the ensemble through a few scenes that take place at the ball. Last weekend I finally got to see the final product that all that preparation has led to, and it's a crazy, wonderful, magical, insanely fun experience for kids and adults alike.

This Cinderella has all the familiar elements you expect (glass slippers, mean stepsisters, pumpkins turning into carriages, a handsome prince looking for his princess), but the telling of it is a little... off-kilter. CTC company members Autumn Ness, Dean Holt, and Reed Sigmund play the stepmother and stepsisters, and they ham it up exquisitely and unceasingly. Dean and Reed particularly have a lot of wild and zany fun with the physical comedy, to hilarious effect. The script (by John B. Davidson) is chock full of pop culture references (from Pokemon to the Kardashians to Stranger Things), and the fourth wall is repeatedly broken to the delight of the young audience. We are encouraged to stand up and scream at the utterance of the "secret word," to beg for candy, to answer back to the characters on stage, and a (un)lucky few audience members even get to go on stage and participate. This creates a wonderfully fun and engaging atmosphere, like a big party, and in fact the end of the show, after the obligatory wedding, devolves into a dance party that spills out into the lobby.

In addition to the three goofballs mentioned above, the beautifully diverse and talented cast is once again led by CTC company member Traci Allen Shannon as the strong, kind, beautiful Cinderella, with David Murray as her Prince. These two talented actors (with gorgeous voices both) recently co-starred in Theater Latte Da's stunning production of Ragtime, and it does my heart good to see Sarah Brown Eyes and Coalhouse Walker Jr. get a second chance at a happy ending. On the backstage tour, we had the opportunity to chat with the cast, so of course I had to ask Traci and David what it was like to go from heavy tragedy to the fun and silly Cinderella. While admitting that it's a much lighter show, Traci noted that while Ragtime has a strong and obvious message about African American history that can much too readily be applied to the present, Cinderella is in its own way espousing that same message by giving us an African American Cinderella and Prince, a rare and beautiful thing to see.

It may still feel like an unusually late and long fall outside, but it's Christmas inside the Children's Theatre. Cinderella is told within a framework of a traditional Victorian Christmas, where the elder (Gerald Drake) regales his hoop-skirted and top-hatted friends with the story. In between scenes (as the massive set pieces are switched out) we return to the Victorian Christmas for a song, a dance, or a joke, and then go back to the story. These olios feature traditional songs, but the songs within the Cinderella story are much more modern. The Steps sing "Girls Just Wanna Have Fun," Cinderella longingly sings "I Wanna Dance with Somebody" while dreaming of the ball, the Prince sings "Stay with Me" when Cinderella runs away at midnight. The music is a delight, with direction, composition, and orchestration by Victor Zupanc leading the six-piece pit orchestra (and also featuring into the story a bit).

On the backstage tour we got to see some of costume and scenic designer Eduardo Sicangco's original elaborate drawings. The saying "third time's the charm" seems to apply here; the prop-master said that they've finally been able to execute all of the elements of the design that they may not have had time for the first or second time around, taking what they built before and adding to it to make it even better. The attention to detail in the four main sets (the kitchen with the massive fireplace, the stepsisters' bright and colorful bedroom, the dreamy winter garden, and the cool elegant ballroom) is truly mind-boggling and impossible to take in in just one sitting. The costumes are truly stunning, from the outrageous Step-family, to the exquisite hand-painted blue ballgowns, to the oversized frames of the mouse and reindeer heads, to Cinderella's sparkle-tastic wedding dress. Magic is created when pumpkins fly and adorable little mice pop up out of nowhere (puppet design by Eric J. Van Wyk). A lot of time, work, energy, and love went into creating the environment for Cinderella, and it shows.

Cinderella is a light and fun show, but I can't help looking at it a little deeper. It's impossible to view the world the same as I did a week ago, or to view theater the same as I did a week ago. I've been hearing the phrase "Trump's America" a lot lately, but I reject that notion. This is not Trump's America, this is our America, it belongs to all of us. I do not live in Trump's America, I live in an America where people of all races, gender identities, sexual orientations, ages, ethnicities, religions, and nationalities laugh, play, sing, and dance together; where Sarah Brown Eyes and Coalhouse Walker Jr. get the happy ending they deserve; where kindness and beauty triumph over cruelty and ugliness. An America that is beautifully represented on the Children's Theatre stage. Now is the time to envision our America through our art and to bring it to reality, in small ways or large. Cinderella fills my heart with hope and joy, with wonder at the beauty we can create if we all believe and work together.

Cinderella continues through January 8. Tickets can be expensive, especially for large families, but balcony seats are cheaper, as are weekdays, and there are a limited number of $15 tickets at some performances. So search around to find the best price (and remember, lap passes for children three and under are just $5). Every child deserves to experience the joy of Cinderella and not be limited by cost.


Keep scrolling for more backstage photos and a video put together by Kendra of Artfully Engaging.