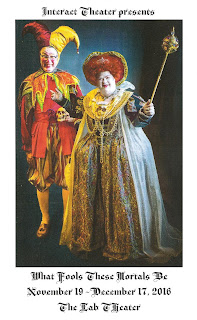 Interact Center for Visual and Performing Arts is celebrating 20 years of "creating art that challenges perceptions of disability." In one of the finest examples of inclusivity in theater, Interact provides opportunities for artists with disabilities to share their work, which allows the audience to see beyond the disability to the artist and the art that they create. I attended a performance by Interact Theater for the first time this weekend, a mish-mash of Shakespeare plays called What Fools These Mortals Be, written by and starring beloved local storyteller extraordinaire Kevin Kling. I was completely charmed by the performance. It's such a beautiful thing to see people of various abilities working together to create art. What Fools is filled with much humor and heart, and a spirit of playfulness often lacking in Shakespeare. Ten Thousand Things shows us that "theater is better when everyone is in the audience," and Interact shows us that theater is better when everyone is on the stage.

Playwrights Kevin Kling, Aaron Gabriel, and Jeffrey Haas have managed to shove a lot of Shakespearean characters and plots into 80 minutes. Not being a Shakespeare scholar, I'm sure I missed many of the references, but I recognized bits from some of his most famous plays Midsummer Night's Dream, Romeo and Juliet, Hamlet, The Merchant of Venice, and more. The premise of the play is that the acting troupe from Midsummer, led by aspiring playwright Billy Quiverstick (Kevin Kling), is in fear for their lives and fleeing to the new world known as Canada (Ca-NA-da). Queen Elizabeth has been told that a fool is plotting to assassinate her, so she declares that all fools must be rounded up and killed, hence the need to flee. The mechanicals travel to Denmark, Venice, Illyria, Athens, and other locations of Shakespeare's plays, encountering various characters along the way.

A few highlights from the show:

At times I forgot, or couldn't tell, which were the professional theater artists and which were the artists with disabilities, and I think that's the point. They (and we the audience) are all in it together, playing, entertaining, making art.

The charming and playful What Fools These Mortals Be continues through December 17 at the Lab Theater (discount tickets available on Goldstar). And consider supporting Interact's work by attending their 20th Anniversary Gala on November 30, also at the Lab.