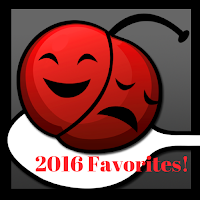 My dear theater friends, here we are again at the end of another year. Time to reflect and look back on the amazing year that 2016 was... in terms of theater anyway, if not in other areas. And now is the time, when we are faced with crises on many fronts, that we need to look to our artists to lead the way, to shine a light on the problems in the world and start a conversation. Thankfully we have an unparalleled pool of theater artists in the Twin Cities, whose work I will be looking toward and sharing in the year to come.

2016 was filled with some exciting firsts for Cherry and Spoon as I passed six years of writing about theater. I finally had my own original logo designed, and joined Instagram. But the most exciting new development of 2016 is the emergence of the Twin Cities Theater Bloggers, representing more than a dozen unique voices. We started meeting privately in 2015, and went public in January of this year with the announcement of the First Annual TCTB Awards. Since then we've held blogger events at several theaters in town, produced videos with interviews and behind-the-scenes looks, and regularly shared review roundups on our Facebook page and the TCTB blog. Being a part of this community of theater writers, sharing theater, drinks, meals, road trips, and chats together, and watching TCTB grow and become a part of the #TCTheater (our Twitter hashtag) community, has been my favorite thing about 2016. Be sure to watch for the announcement of the Second Annual TCTB Awards in the next week or two, and join us for a very special episode of our monthly Twitter chat on January 9.

In 2016 I saw over 250 shows (counting the 54 Fringe shows I saw in 11 crazy days in August) by over 80 companies at over 60 venues. Unlike most of the past 15 years, I did not make it to NYC this year. But I did venture out of the Cities to see some great theater outstate, including a beautifully tragic Cat on a Hot Tin Roof in St. Cloud, a hilarious Urinetown in New Prague, and a fantastically dark and quirky Assassins in Duluth. Here in Minneapolis/St. Paul, there were very many shows that I loved, too many to include in this post. What follows are the shows I'd like to share with you. Please share your 2016 #TCTheater favorites in the comments below or on social media.

Ten shows that I really really loved in 2016 (in alphabetical order):

Ball: A Musical Tribute to My Lost Testicle was not only a highlight of the 2016 Minnesota Fringe Festival, it was a highlight of the 2016 #TCTheater season. Max Wojtanowicz's auto-biographical one-man musical about his cancer diagnosis, treatment, and after-effects was so beautifully and painfully real, so funny and heart-breaking and moving, that it brought the entire audience to tears and to their feet. And the songs (composed by Jason Hansen, Michael Gruber, and Andrew Cooke) are really great too. As I wrote then, "When you can take a painful and difficult experience and turn it into something that's entertaining, engaging, and moving, that's a true gift."

Walking Shadow's The Christians was one of those plays that challenged me and made me think as it explored ideas of faith, belief, and relationships. With the entire play structured as a sermon in one of those mega-churches, it featured a strong ensemble and one of the best performances of the year - Andrew Erskine Wheeler. "There is no pretense here, no sign of acting, he just is this sympathetic, frustrating, humble, egotistical, selfish, giving, complicated, magnificent man known as Pastor Paul. I was with him the whole way in this journey and felt his every emotion, from rapture to devastation."

Any one of Jungle Theater's five plays this year could have made this list (an all-female Two Gentleman of Verona, the modern rom-com with substance Le Switch, the intense and lyrical Bars and Measures, or the quietly lovely The Oldest Boy). But if I have to pick a favorite among them, it's Constellations, the alternate universe story of a romance starring the stunning duo Anna Sundberg and Ron Menzel in overlapping repeated scenes brilliantly directed by Gary Gisselman. "It's an incredible feat by the entire team to not only jump through all the hoops of this challenging script, but in doing so to create a piece of theater that is both intellectually stimulating and emotionally fulfilling." 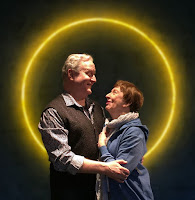 Nautilus Music-Theater's full productions are few and far between, but well worth the wait. The inspired casting of #TCTheater vets and married couple Wendy Lehr and Gary Briggle as the young (at heart) lovers in The Fantasticks brought a whole new life to the longest running musical in the world. The terrific six-person cast (which also included the fabulous Baldwin sisters) and two-person orchestra were unmiked and performed in Nautilus' tiny study space, creating a truly special and intimate music-theater experience unlike any other this year. 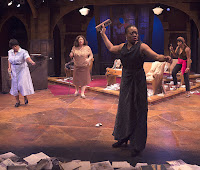 Christina Ham's new play-with-music Nina Simone: Four Women at Park Square Theater hit all the right notes as it showed us who this incomparable woman was, while sharing her music with us. An incredible cast of four women, anchored by yet another strong performance by Regina Marie Williams in the title role, bring one of Nina's songs to life, in what was "a powerful and important play about a powerful and important woman who used her incredible musical talents to fight for justice for her people and all Americans. Her music, written 50 years ago, is just as meaningful today, and this play brings her music and her message to the forefront." (If you missed it you're in luck - it's coming back to Park Square in February). P.S. Christina Ham brought us another fantastic new play in Pillsbury House Theatre's Scapegoat.

I've been a fan of New Epic Theater since their beginning just a few short years ago, but they've never lived up to their name more than in the epic pairing of The Normal Heart and Coriolanus, performed in rep this spring in a feast of blood, beards, and abs, and really great theater. Each one of these plays is a challenge in itself - the gut-wrenching story of the early days of the AIDS crisis, and Shakespeare's story of war and death. To perform these plays together with the same small (and brilliant) cast and similar design aesthetic is a Herculean task, one that New Epic pulled off brilliantly. I went back to see the plays a second time, back-to-back on one glorious day of theater, and was even more impressed with the way they spoke to each other, the pairing truly much more than the sum of the two impressive parts.

If you're looking for the future of music-theater, look no further than our very own 7th House Theater, comprised of some of the most talented young music-theater artists in town. Their third annual new original musical, The Passage, Or What Comes of Searching in the Dark, felt modern and inventive in a Next to Normal/Fun Home sort of way. With book, music, and lyrics by company member David Darrow and direction by the uber-talented ensemble, The Passage was "a beautiful, funny, and poignant piece of music-theater about nothing more and nothing less than love, grief, friendship, family, self-discovery, and growing up. In short, it's about life - the joy and the pain, the epic and the mundane, told in an innovative and modern way."

It was another stellar year for Theater Latte Da as they continue to do theater musically and brilliantly. I loved the new and emotional play-with-music Lullaby, the ingenious casting of talented mother/daughter duo Michelle Barber and Cat Brindisi in Gypsy, Bradley Greenwald and Robert Elhai's gorgeous new musical C., and the Christmas favorites A Christmas Carole Petersen and All is Calm. But it was the timely and topical Ragtime that stole my heart and ripped it to shreds (I think a piece of it is still lying on the floor of the Ritz Theater, which by the way Latte Da bought this year). "Director Peter Rothstein and his incomparable team of actors, singers, musicians, and designers have brought this story to life in a way that's aesthetically pleasing, highly entertaining and engaging, and most importantly, clearly delineates the parallels with our own world."

Even besides the fact that Valerie Curtis-Newton was the first African-American woman to ever direct on a Guthrie mainstage, and the incredible cast comprised of local and national talent, Trouble in Mind was a unique and special show, particularly on the heels of #OscarsSoWhite. As I wrote at the time, "it's hilarious, engaging, and entertaining, and offers a behind the scenes look at the theater world we love so well. But more importantly, it talks about racism, sexism, classism, ageism in a smart and nuanced way that has as much resonance in today's world as it did in the 1950s NYC theater world depicted in the play."

Last but not least, the Ordway's local production of White Christmas is on this list because it just made me happy. So happy that I went back to see it a second time. My favorite Christmas movie that I've seen dozens of times, brought to life in a visually and musically luscious production, with a dreamy local cast and endless stunning dance numbers... yes, I will have seconds of this scrumptious meal, thank you very much! (With a side dish of another fantastic Ordway local production, the quintessential musical about musicals A Chorus Line.)

Another thing I loved about 2016 #TCTheater is all of the site-specific theater, which may be partly a matter of necessity, as we see a number of theater spaces close. But this has resulted in some creative theater locations, my favorite being the James J. Hill House. Three very different shows utilized this beautiful historic space in different ways (the comic opera The Marriage of Figaro, the French farce Tartuffe, and the super creepy Bluebeard's Dollhouse). This year also gave us Theatre Coup d'Etat's The Crucible in a church, Frank Theatre's The Good Person of Setzuan in an abandoned Rainbow Foods, Market Garden Theatre's Public Exposure in a cold and dark warehouse basement, and my perennial favorite - TigerLion Arts' Nature in Nature.

2016 also saw the birth of several promising new theater companies that I hope to see more of in 2017 and beyond, including Underdog Theatre (with a powerful new play Baltimore is Burning), Shoot the Glass Theater (a fine production of my favorite Sondheim Company), Revisionary Theatre (a remount of Keith Hovis' fringey musical Teenage Misery), and Other Tiger Productions' ambulatory The Palabras Project in various locations in Park Square Theatre.

2016 is the year that I "discovered" the local and national treasure that is The Playwrights' Center, now in it's 45th season of supporting playwrights and new plays. After a blogger event this spring at a reading of Lee Blessing's Minneapolis/St. Paul (which will receive another workshop/reading in the spring of 2017), I've attended several more readings and really enjoy being a part of the play development process as our fabulously talented local actors read a new work. PWC has seen several of the works they've helped to develop make it to the stage this year, including Kira Obolensky's The Changelings, Christina Ham's Scapegoat, Philip Dawkins' Le Switch, and more.

That about sums up this incredible year of #TCTheater. Thanks to everyone for reading, following, commenting, sharing, and otherwise supporting Cherry and Spoon, especially the theaters that so kindly offer press comps (I wish I could see everything, and I try, I really do!). Please share your 2016 #TCTheater favorites in the comments below or on social media.

Have a happy, healthy, and safe 2017, filled with incredible #TCTheater!