"Bars and Measures" at the Jungle Theater 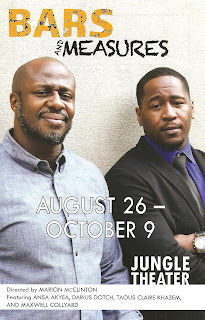 I've only recently become aware of what an incredible resource we have in The Playwrights' Center, located right here in Minneapolis (even if there are occasional bats in the performance space). PWC fosters new playwrights and supports experienced playwrights, helping them to develop new work through various programs, workshops, and readings. Much of this work ends up on the stage, not just here in the Twin Cities but around the country. This spring saw the local premiere of three plays developed at the Playwrights' Center, The Changlings, Scapegoat, and Le Switch. The latter was at the Jungle Theater, which is following that up with another new play by a Playwrights' Center playwright, Idris Goodwin's Bars and Measures. The Jungle's production is one of four around the country in the National New Play Network's Rolling World Premiere. It's a sharp, intense, lyrical, topical play, and in my completely unbiased opinion, I cannot imagine a better production of it than the Jungle's with this incredible cast, director, and technical team.

Bars and Measures says everything it needs to say in not much more than an hour, painting a complete picture of two very different brothers and their relationships, while still leaving the audience some work to do in the interpretation of it (which is a good thing). Elder brother Daryl (Ansa Akyea) was always strong-willed and independent, turning his musical talents towards jazz so he could tell his own story, and converting to Islam and changing his name to Bilal. Younger brother Eric (Darius Dotch) was the "good boy," playing classical music and never getting into trouble. When Bilal is arrested, jailed, and put on trial for allegedly supporting a terrorist organization (see also Disgraced), Eric wholeheartedly believes in his brother's innocence and visits him regularly, "playing" music with him by scatting Bilal's new compositions. Things come out at the trial (expressed with harshly beautiful, intensely delivered dialogue) that make Eric question his brother's innocence. Their relationship is tested, and both turn to music for comfort, healing, and connection.

The story is told more or less linearly, beginning with Eric visiting Bilal in prison, through his trial and sentencing, with a few flashbacks to fill in the rest of the story. These diversions from the regular timeline are easily followed thanks to the staging, which also beautifully shows the juxtaposition of the two different worlds that the men inhabit. On one side of the stage is Eric's posh modern apartment with sloping wood floor and grand piano, on the other side is Bilal surrounded by cold cement blocks. Lines and shapes of neon light up with the music, signifying the other world that both brothers enter through music (lighting design by Michael Wangen, scenic design by Andrea Heilman).

Speaking of music, it's a huge part of the story, or rather, the story, characters, and relationship are partly expressed through music. Justin Ellington has composed original music that we hear either through recorded sound, or, most effectively, through the brothers scatting with each other, like a conversation. The classical musician and the jazz musician try to find common ground, learning from each other, while still staying true to themselves.

The play is clearly and sharply directed by Marion McClinton, and the cast (which also includes Taous Claire Khazem and Maxwell Collyard in multiple roles) is wonderful and such a joy to watch. As part of the Jungle's "Come Early" (pre-show talks on Sundays), "Stay Late" (post-show talks after every performance) program, Ansa Akyea led a short post-show discussion, and he couldn't have been lovelier. I just adore listening to artists talk about their work, the whole process of bringing a character and story to life is so fascinating to me. But he also did a wonderful job of listening to the audience, encouraging discussion and exploration on both ends. The post-show discussion a really wonderful feature for the Jungle to offer (as is the reading list in the program), and I highly recommend that if you go see this play (and you should), stay for the discussion to enhance your theater-going experience.