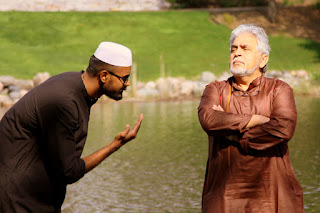 Summary: A Bollywood-style story of an Indian man prejudiced against Muslims who learns acceptance through the power of love (and dance).

Highlights: The creators of the best-selling Fringe show of the past two years return again with another huge-cast high-energy musical. The story is a bit trite, the lesson a bit heavy-handed, but it's a wonderful message of acceptance and love winning out over hate and fear. And the cast vibrantly inhabits the characters, especially when dancing (highlights include Ranjan Dumra as the lovable curmudgeon Appu, Darshan Maiya as his identity-conflicted son Raju, Arun Velliangiri and Sophie Gori as the star-crossed lovers, and Erin McGregor as the American girl Raju falls for). Two narrators (Hetal Ascher and Madhu Bangalore) introduce the characters and scenes, commenting on the Bollywood form with clever fourth-wall-breaking charm (similar to how Jane the Virgin follows the tropes of the telenovela while also poking loving fun at it). And now for the best part - the dancing! There's something about Bollywood dance, and this company in particular, that's so joyous and free. This might be the most energetic show in the Fringe, deserving of the huge and enthiusastic crowds they draw. It's great to see that they're using their platform this year to promote cross-cultural awareness, support, and community. Wouldn't it be wonderful if all the world's wars and conflicts could be solved through dance?!