Fringe Festival 2016: "The Nutcracker and the Mouse King" 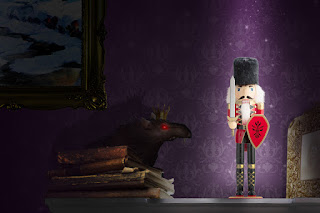 Title: The Nutcracker and the Mouse King

Summary: The familiar Nutcracker tale, but told as a dramatic play.

Highlights: I'm not that familiar with The Nutcracker, either the ballet or the original story, so the story of the girl who dreamed her Nutcracker to life is new to me. Young Marie is frustrated with her life, her parents, and the party they have planned. Her beloved Godfather givers her a Nutcracker along with his story. We then move to the imaginary land of princesses, two young men who are rivals for her affection, and mice that fight and talk. I wish that the creators could have found a different twist on the story than the tired old cliche of two men fighting for the fair princess' hand, and I actually found the "bad guy" to be the more interesting of the two (partly because of Jonathon Dull's compelling performance), he was just given a bad lot in life and made a bad choice. But it's an interesting turn on an old tale, the ensemble cast does a great job playing multiple roles (another standout - Kaitlin Noble as Marie), and there's a nice sprinkling of music and dance that ties it to the original.