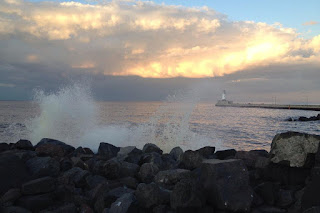 Title: The Story of You and Me

Summary: A site-specific story of a relationship, in which we literally and emotionally journey with Vincent and Juliana from childhood friendship, through teenage courtship, and on to the challenges of marriage and parenthood.

Highlights: Four different actors play Juliana, and three play Vincent, as they age from children (the charming youngsters Kiera Burke, William Rubesch, and Elizabeth Rubesch), to teenagers (Rachel Chevremont and George Petermeir), to adults (Bailey J. Hess and Aaron Henry). At times the older version of Juliana or Vincent is watching their younger selves and commenting, almost like a memory play. We follow the play to different locations within the SpringHouse Ministry Center, although mostly in one room (with tall ceilings that create echoing sounds, which makes hearing the dialogue difficult at times), with one scene in a second room. I would have liked to see more use of the space available than just these two rooms, and there were some logistical challenges in the first performance (the audience wasn't quite sure what to do at times) that will likely be worked out as they gain more experience with the piece. The play is strongest when it focuses on the relationship between Juliana and Vincent, which is compelling and feels real.