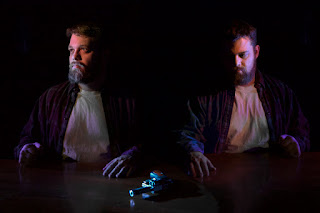 Summary: A series of stories about guns, and a plea for more conversations in the middle.

Highlights: Playwright E.M. Lewis speaks very plainly, directly, and conversationally about her experiences with guns, both the good and the bad. Growing up in rural Oregon, her family always had guns and she herself learned to shoot from her soon-to-be husband. She also tells a story about when she was held up at gunpoint while working in a book store, as well as a personally devastating experience that forever changed her life. "She" is played by Aaron Konigsmark, who, even though he's telling someone else's story, imbues the stories with emotion and humor. There are some statistics, visual aids in the form of political cartoons, and framed family photos and memorabilia packed away in a cardboard box. It's a powerfully written play, well executed by the cast and creative team, one that hopes to start a real conversation that isn't just two opposing sides yelling at each other, a conversation to work towards our common goal of ending gun violence. (The creators recommend Everytown For Gun Safety as a resource.)