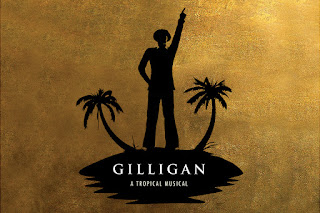 Summary: A musical based on the iconic 1960s TV show Gilligan's Island, told in the style of Hamilton.

Highlights: The team behind last year's smash hit Fringe show Oregon Trail: The Musical returns with a takeoff on the current Broadway smash hit Hamilton. You can watch the opening number here, in which First Mate Gilligan is introduced by the other castaways a la Alexander Hamilton's introduction. What follows is sitcom-like scenes interspersed with Hamilton parodies, including Gilligan singing "I'm not very good at knots" ("I'm not giving away my spot") and Mr. Howell singing "She'll be back" (my personal favorite song, "You'll be back"). The songs are incredibly clever (composed, er... maybe adapted, by Kyle DeGoey, with lyrics by Kyle and Travis Carpenter) and I wanted more of them! "The island sisters" are mentioned ("Marianne, Ginger, ... and Lovey") and I was really hoping we'd get to see that number (nope). There's a Wizard of Oz diversion that doesn't seem necessary when  you have source material as rich as Gilligan's Island and Hamilton to mine. But I'm being nitpicky. The show is incredibly clever and fun, with super fast lyrics well-delivered by the cast (Aleksandra Sobie, Chris Laumann, Erin Kennedy, Justin L. Rios, Kyle DeGoey, Matthew Englund, Roxanne Britz, Travis Carpenter). It's a must for the Hamilton-obsessed.

Warning: the first two performances sold out and the remaining three are at high risk to sell out, so you might want to make advance reservations or show up at the theater early to ensure a spot.