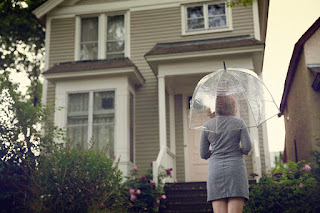 Title: It Always Rained in Paris

Summary: A woman on the verge of divorcing her French husband invites the girl she nannied for 15 years ago in Paris to come to America to be a nanny for her children.

Highlights: Playwright Hailey Colwell was inspired to write this play after spending the last year working as a nanny in a wealthy neighborhood in Paris. I don't know how a 20-something writes so well about the feelings of nostalgia and regret that come with a few more years of life experience. This is a story tinged with nostalgia, as Ellie (Anna Olson) remembers her year in Paris, where she met her husband Nic (Bill Williamson). After realizing they love the idea of each other and the time they spent together in Paris more than the person they each have become, they're in the process of divorcing. Ellie invites the now grown-up Michele (Dani Pazurek) to America look after her children Gabriele (Louisa Schirmacher) and Bastien (Huxley Westemeier) in hopes that the connection to Paris will somehow help. In a way it does, as Ellie confronts her reasons for being so obsessed with Paris, yet never wanting to go back, and finally begins to get unstuck. The cast beautifully brings this story and these very human characters to life, and live music by John Hilsen on keyboard perfectly sets the tone of nostalgic melancholy.