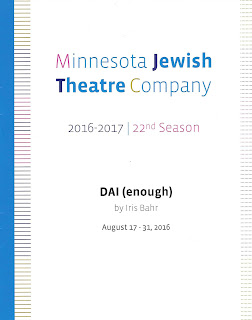 When I returned from this afternoon's performance of Minnesota Jewish Theatre Company's DAI (enough), I sat down at my computer, opened up the internet, and saw the headline "Palestinian rocket strikes Israel, drawing Israeli reprisal." When will this decades-long conflict be over? When is enough enough? I'm not going to pretend to know enough about this issue to speak intelligently about it, but this new production by MJTC certainly does. Or rather, it tells the very specific stories of ten people gathered in a cafe in Tel Aviv in 2006, as portrayed by one actor. It's a devastating look at the impact of the never-ending violence on human lives, in addition to being a completely engaging and entertaining play.

Playwright Iris Bahr (who was born in the Bronx and lived and served in the military in Israel) has performed this piece around the world. But in this production we only have her beautiful, funny, dark, moving words; the performance is in the very capable hands of local actor Miriam Schwartz, under the clear direction of Warren C. Bowles. Having previously proven she can transform herself into a famous 69-year-old sex therapist, Miriam here transforms herself into people as varied as a British TV reporter, a German man, an Israeli kibbutznik, and a Russian prostitute. In a series of ten monologues, she brings these people to life as full and complicated characters, mastering the accent and attitude of each one.

Each monologue ends with a (spoiler alert) bomb exploding, with a flash of light and loud boom that startled me every single time, even when I knew it was coming (lighting by Paul Epton and sound by Anita Kelling). That's how caught up I was in the storytelling, that I forgot to brace myself for the upcoming shock. Liz Josheff Busa's costumes help Miriam easily slip into and out of character. Dressed in black pants and top, she dons shoes, shirt, and accessory and becomes someone else, until she sheds the character, letting it slowly drop to the floor before moving on to the next one. Michael Hoover's clean and simple set design of cafe tables and chairs, with a long shelf full of cool toned dishes, provides the backdrop for the stories.

DAI (enough) doesn't provide any answers to the conflict; some characters couldn't care less about it, they're simply in Israel to work or live or love, while others would sacrifice their life for their cause and country. But it does give voice to the people of Israel and their very human stories. This compelling, well-written, beautifully acted, devastating play continues through August 31.