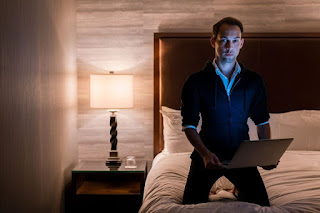 Summary: On the night of the presidential election, photos of the would-be president's son surface that could be interpreted as anti-Muslim.

Highlights: The political is personal, and the personal is political. In this play, the political and personal are very closely intertwined as college student John (Grant Sorenson in a compelling performance) struggles with the notoriety of being the son of a politician, soon to be the president. He's sitting in a hotel room (represented with New Epic's usual crisp, clean design - a square drawn on the floor by fluorescent tubes, a bed dressed in shades of gray, matching the wardrobe, white lamps nightstands) with his friend Matt (Ryan Colbert) watching the results roll in. They're visited first by John's father's frustrated staffer Marc (Michael Wieser), then by John's mother (Jennfer Blagen), and finally by John Sr. (Peter Moore). John stands up for himself and his freedom of expression, until he realizes just what lengths his parents will go to. An hour of intense dialogue, weighty and timely topics, clear direction, and five excellent actors you have (or will) see on big and small stages around town. Many Fringe shows are very "fringey" (weird, frantic, edgy, perhaps a little rough around the edges), this one is not. It's high quality drama, right in line with New Epic Theater's two-year trajectory that's been a pleasure to watch.