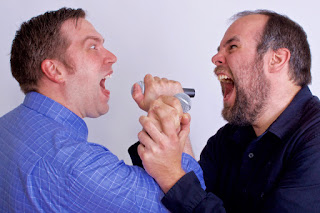 Summary: An improvised singing competitions between four contestants, with songs based on audience suggestions.

Highlights: Before the show, the audience is asked to fill out a short questionnaire, which is used as the basis of the songs. Host Eric Thompson introduces us to the four contestants (played by Molly Glover, Jeff Gyllen, Lauren Haven, and Aaron Cook), who go through four rounds of competition: solos, duets, a sing-off (group number), and the winner's solo. The talented and fast-thinking singers make up songs on the spot about such odd subjects as chainsaws, tweezers, and Monopoly. Chad Dutton ably and enthusiastically accompanies them on the keyboard with a variety of song styles. It's hard to believe this is improvised, the songs are so well done, but I guess the silly lyrics give it away. I'm always impressed by improv actors who can create a character out of nothing, but this group does that, plus writing songs as they're singing them! It's great fun to watch.

(Nerdy aside: I wonder if the company name, Double-Blind Productions, is a reference to clinical trials? Are there statisticians on the team?! #statsnerd)