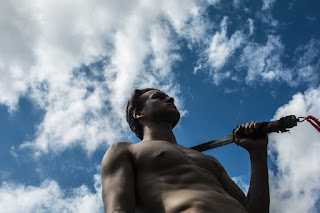 Summary: A crazy and campy heavy metal musical about a classic hero story.

Highlights: This is a pretty outrageous musical, with rockin' original music and a fairly conventional hero story told in an maniacally overdrawn, fourth-wall breaking sort of way. In some faraway kingdom, a poor knight Nicodemus (played by a woman, Madison Olimb, with serious pipes) is in love with the princess (Ali Daniels) who is kidnapped by the evil Secundus (book writer Sam Landman, with wild eyes and a great rock scream). Nicodemus goes on an impossible quest to rescue the princess, defeat the monster, and restore order to the world. Just your typical hero cycle. But it's told in a fun, campy way which the cast gleefully jumps into with both feet. The songs (introduced by a shirtless greased gladiator holding a sign) are fantastic and well-sung, with appropriately loud recorded music, plus one live guitarist, Eli Stone (who wrote the songs along with director Joe Johnson*). SmashHammer is one fun, crazy, fringey musical.

*The original album is available for purchase at HiFi Hair Salon and Records.