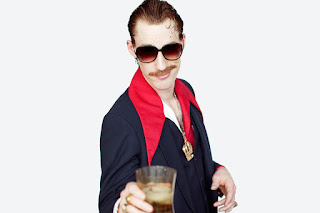 Summary: The master of Fringe comedy/music improv Tom Reed returns with his character Lounge-asaurus Rex, the loungiest singer of them all.

Highlights: I first encountered Lounge-asaurus Rex (and Tom Reed) at Sample Night Live several years ago. It's a great character, a great shtick, one deserving of a whole show, which he finally gets here. Dressed in '70s-style leisure suits, chunky gold rings, and big dark glasses, with a drink in one hand and a corded microphone in the other, Lounge-asaurus Rex talks, and he sings (the difference: singing takes longer to convey information). He chats with audience members (avoid aisle seats if you don't want to be chatted to) and then makes up a song about the conversation, e.g., songs about Duke Ellington, world peace, Tom Sawyer, a Fringe show promotion, or dietitians. Loungey (as I like to call him) loves the sound of his own voice so much (and he should, it's a great one) that sometimes he sings questions or statements instead of merely speaking them. Accompanied by Justin Nellis on keyboard, the songs are really funny and clever, and Tom is incredibly quick in coming up with lyrics and rhymes. It's obvious he's been performing as this character for a number of years because he's extremely comfortable and confident as Loungey, yet the act never gets old or stale no matter how often I see it. Louge-asaurus Rex is a super entertaining, funny, quick-witted, well-sung show, and in typical Tom Reed fashion, there is shirtlessness (and pantlessness)!