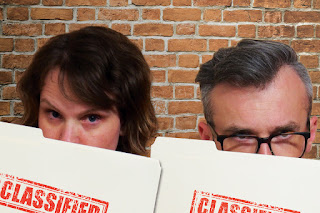 Title: In the Time of Spies

Highlights: In this really funny broad sketch comedy, chock full of physical humor (crazy exaggerated fight scenes) and sight gags (one of those grabber things as a hand), we meet a team of spies working for the CIA. Typical TV show spy tropes like a mole in their midst, long lost mothers, Russian bad guys, and love triangles unfold, as described and introduced by chanteuse narrator (Anna Hickey). The hilarious cast (also including Joe Bozic, Mike Fotis, James Rone, Rita Boersma, and Jason Ballweber, most of whom come from the improv/sketch comedy world) plays every moment to the hilt. Two "episodes" of In the Time of Spies are presented, and as a TV junkie I loved the "previously on" recap and the silly opening credits that they repeat at the beginning of each episode. It's ridiculously good fun.