"Paint Your Wagon" at the Ordway Center 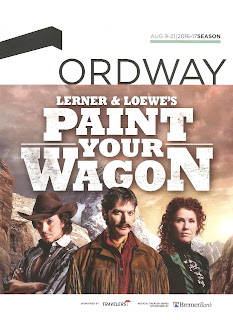 I had never even heard of the 1951 Lerner and Loewe musical Paint Your Wagon when the Ordway announced it as part of their season. I guess that's not too surprising; it ran for less than a year on Broadway and has never been revived. The story was significantly rewritten for the 1969 movie adaptation starring Clint Eastwood, which also included a few new songs. Seattle's 5th Avenue Theatre (director David Armstrong and book writer Jon Marans) scrapped both the original and revised book (they're a little bit racist, and sexist) to write a new story set in the Gold Rush era of California, making it more reflective of the many diverse cultures that came together to build the great American West. This production has moved to the Ordway for two weeks, with a few local additions to the cast. This thrilling story of the beginnings of the American West (think Deadwood the musical, only with significantly less cursing) with a beautifully diverse cast has rescued this gorgeous Western and Mexican influenced score from the place where problematic old musicals go to die.

The story focuses on a Tennessee politician turned long-bearded trapper named Ben Rumson. He meets a "Mexicano" named Armando whose family were wealthy ranch-owners until the white people came. The two form a partnership and join the community that includes an ambitions business man (the Cy Tolliver of Rumson City, if you will) and his slave who's trying to buy his freedom, a free black man, men from China who are trying to make money for their families back home, an Irishman who's doing the same, and a Mormon con man with two wives whom he treats badly. He threatens to sell Cayla to the highest bidder, and she willingly agrees because any man would be a better husband. Lucky for her Ben "buys" her and in typical musical theater fashion the two fall instantly in love and marry. The town becomes successful as more gold is discovered, leading Jake to bring in a group of showgirls for entertainment and companionship. Ben's daughter also arrives and falls in love with Armando, and they vow to be together despite the difficulties they may face as an interrracial couple. Tensions mount as the gold dries up, and many move on from the once bustling town to the next hot spot, but our core characters stay to forge a better life, a community, and a home. 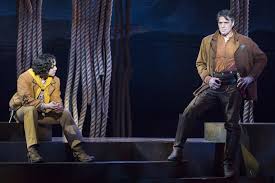 Most of the Seattle cast remains with the show, and they're incredible, notably Robert Cuccioli as the strong silent Ben with the rumbling baritone and Justin Gregory Lopez's sweet-singing Armando (who makes gorgeous harmony with Kirsten DeLohr Helland). When Kendra Kassebaum (Cayla) had to drop out for another project, the Twin Cities' own Ann Michels stepped into the role with spirit, energy, and that powerful voice of hers, as if she'd always been there. Another local favorite, Dieter Bierbrauer, also took over an ensemble role that unfortunately does not fully utilize his talents (although we do see more of him than expected). Everyone in the cast brings great specificity to their roles, repesenting a cross-section of America. And they sing like a dream.

I was not familiar with any of the songs in the show, but I loved it, and wish there were a cast recording of this cast and with this selection/arrangement of songs, which includes most of the original score, although reordered with some songs assigned to different characters, and a few songs written for the movie. Traditional musical theater songs are interspersed with Western and Mexican influenced songs. "They Call the Wind Maria" is an absolutely thrilling song and a highlight of the score. (What is is about the name Maria that inspired so many musical theater classics? "How do you solve a problem like..." "I just met a girl named..." and "They call the wind..."). There's gold to be found in the orchestra pit in more ways than one, with the inclusion of steel guitar, harmonica, banjo, and mandolin giving it that folk/country/Western sound. 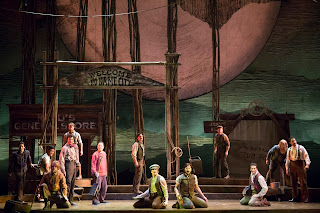 The show also features some great choreography by Josh Rhodes, especially the driving "No Name City," like a darker, grittier "There is Nothing Like a Dame." Jason Sherwood's set design includes a revolving stage that lets us see all sides of the community, with simple tents giving way to facades of grand old Wild West buildings.


What a fantastic idea. If an old musical doesn't work in today's world, why not rewrite it, either a little or a lot, to make it more culturally sensitive and relevant to a modern audience? The creators of this show have an eye on Broadway, and I would love to see this reinvigorated Paint Your Wagon end up there. Until then you can see through this weekend only at the Ordway Center in downtown St. Paul.