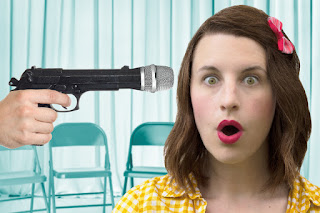 By: Six Four Six One Productions

Summary: The post-show talkback of a community theater's production of an edgy play takes a darkly funny turn.

Highlights: I always stay for a post-show talkback, so I couldn't resist a talkback that IS the show! After a performance of the edgy two-person drama Take at Beulah Community Theatre (abbreviated BCT - is that an intentional or inadvertent reference to the theater now called Artistry?), artistic director Becky (a hilarious Christine Karki) introduces the talkback and tells us about BCT's new season (the whole show is performed with house lights up). She's joined onstage by the director (Ben Thietje), the actors (Bobby Gardner and Anna Weggel-Reed), and the writer (Patrick Kozicky), who traveled from NYC just for this event (or did he?!). The play (written by Adam Hummel) pokes gentle fun at talkbacks and theater in general (the actor sipping tea, the grumpy audience member using the talkback as an opportunity to complain he couldn't hear the dialogue). But then disgruntled actors (Joe Bombard and Angie Martin) bust in and demand to be heard. The tame talkback turns into a mess of a situation as secrets come out. Although making a joke out of people with guns attacking a public gathering is a little uncomfortable in light of recent events, Take Talkback is a darkly funny spoof of all things theater.