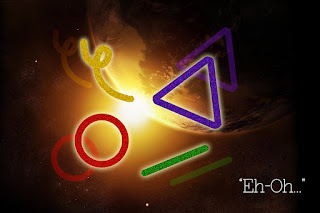 Summary: A series of delightfully silly skits based on the children's TV show Teletubbies, along with more sobering monologues pondering the deeper things in life.

Highlights: I'm not quite sure how to write about this one (I heard another audience member say "It's Fringe as f**k). It's definitely unlike anything else you'll see at the Fringe this year. The Teletubbies (played by Bre'Elle Erickon, Paris Kelvakis, Hillary Olson, and Zack Roberts) are a delight as they act out the various silly things that Teletubbies do, with a childlike look of wonder or surprise or confusion on their faces. But there's also a deeper darker undercurrent, as the Tubbies begin to express resentment at the narrator (Eric Siegel) and his rules and schedules. Each of the Tubbies has a monologue in which they muse on happiness, beauty, or human connection, in a surprisingly poignant way. Even the narrator has his moment of reflection, as he realizes maybe it's time for the final Tubby bye-bye, and then what? There's also an oddly moving modern dance number. It's an extremely unique, surprisingly thoughtful, sweetly charming show.