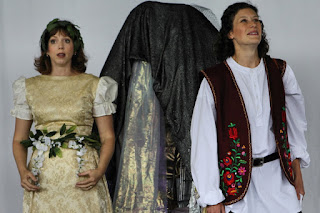 By: Garden of Song Opera

Summary: A condensed version of the 1762 opera performed in English by three women.

Highlights: Garden of Song Opera is a new opera company focused on providing more jobs for women in opera (because apparently like most other fields, opera is dominated by men). In that spirit, they're presenting this three-person opera, with all roles played by women. It's the traditional mythical story of Orpheus, who follows his departed wife Eurydice into the Underworld and attempts to bring her back, while the Goddess of Love watches and laughs, as Gods do. It's beautifully sung by the cast (Sara Fanucchi, Carmelita Guse, and Betsie Feldkamp) with pathos and occasional humor. There's not much opera in the Fringe, so if you're looking for an opera fix - this is the show for you.