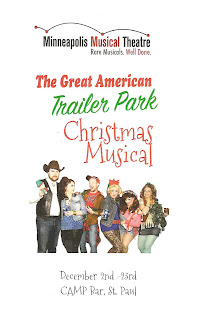 And now for something entirely ridiculous (in a good way). There is a lot that's sugary sweet about Christmas, and Christmas-themed theater in Minnesota (of which there is much from which to choose). But none of it exists in Minneapolis Musical Theatre's contribution to the holiday theater scene - The Great American Trailer Park Christmas Musical. It's pure campy and irreverent fun. This is a sequel to The Great American Trailer Park Musical, which MMT did in 2009 (and played Off-Broadway in 2005). If you saw the original, you will recognize some familiar characters (and even one returning cast member). But if you didn't, no matter, it stands on its own in all its trailer trash glory. The songs are catchy and fun, director Ryan McGuire Grimes sets the perfect campy tone, and the terrific six-person cast completely commits to the stereotypical characters and nonsensical plot. Appropriately performed in St. Paul's Camp Bar, with readily available alcohol, it's great escapist fun (at least until that one reference towards the end that will sober you up right quick).

Neighbors Betty (Betti Battocletti, natch), Lin (short for Linoleum, played by Jodi Tripp from MMT's 2009 production), Pickles (Holli Richgels), and Rufus (Matthew Englund) have proudly decorated their trailers with the most garish Christmas decorations you could imagine. They've entered a Christmas decorating contest with the magazine Trailer Homes and Gardens. Unfortunately, their Scrooge-like neighbor Darlene (Alex Kotlarek) throws a wrench in the proceedings by refusing to participate and threatening to call the fire department and report the wiring mess they've created. But fortunately, Darlene is electrocuted, loses her memory, and becomes a nice person. This surprises her fiance, the wealthy Jackie (Adam Rice) who threatens to buy the trailer park and throw them all out. There are some visits from ghosts, a flashback or two, and an ancient spirit. Like I said, it's all pretty silly, but just go along for the ride and don't worry too much about it.

The little stage at Camp Bar is more decorated than I've ever seen it. Kudos to prop master and set decorator Andre Johnson, Jr. for creating ornaments out of light beer cans, hangers, and laundry detergent containers. Costume designer Kecia Rehkamp has made the cast look appropriately trashy in a fun and colorful way, with some fantastically bad wigs. And that little stage holds more false eyelashes than I've seen in a long time (again, these are all good things!). 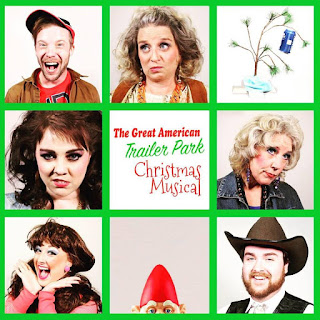 Despite the camp, the show really does embody the spirit of the holidays, even in the song "F**k It, It's Christmas." Which is actually a lovely sentiment - forget your worries and disagreements, and just revel in a moment of lights, joy, singing, and Christmas cookies. "My Christmas Tin Toy Boy" is lovely ballad about childhood wishes that don't come true, and "Christmas Memories" is a sweet duet. (Believe it or not, the original cast recording is available.)

But don't look for anything too deep - just a fun show that doesn't take itself too seriously, a great cast, and live musical accompaniment (a backstage three-piece band led by Anthony Sofie).