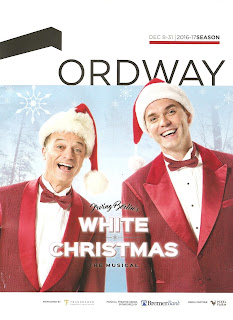 There's no denying that 2016 has been a less than stellar year, but inside the Ordway Center for the Performing Arts, it's nothin' but blue skies! You may be concerned about the state of our nation, or our world, you may be worried about what the next year will bring on a national or personal level, you may be feeling grief, or loss, or confusion, but the Ordway's scrumptious production of everyone's favorite Christmas-movie-turned-stage-musical will make you forget all of that, at least for a few hours. There are two things art can do in times of crisis - it can provide a welcome escape from the stresses of the world, or it provide commentary, conversation, questioning about the world. Both are needed, and as long as we have plenty of the latter (and we do - see this, or this, or this), there is room for pure escapism that thrills and enthralls with its familiar beloved music, gorgeous set and costumes, and fantastic performances by a large and mostly local cast. This is exactly what the Ordway's White Christmas does. So if you're worried and you can't sleep, go see this show, and when you go home you will fall asleep counting your blessings. And then get up and get back to work.

White Christmas is my favorite Christmas movie (along with Love Actually), one that I've seen dozens of times. Each song, each costume, each moment is iconic in my mind. And while I might have a few quibbles, book writers David Ives and Paul Blake have really done a wonderful job of adapting the movie into a stage musical. They've removed a few songs (I miss "Gee, I Wish I Was Back in the Army") and added some additional Irving Berlin songs ("Love and the Weather," "How Deep is the Ocean"), giving them to characters to sing in conversation with each other, thereby converting it from a play with music (which it would be if exactly like the movie) to a true musical.*

The plot is pretty much the same, with a few tweaks. Gone is Betty and Judy's escape out the window of the club, and Betty's misunderstanding of Bob's motives has changed form (and is, if possible, even weaker - but drama must be created to have that beautiful reunion). A few other things have been tightened up or skipped over, but fans of the movie will not be displeased. When you get right down to it, the plot is pretty typical romantic comedy/musical theater fair (I hate you - I love you - I hate you - I love you!), but the plot is really just an excuse for all that fabulous dancing, music, and snow.

And fabulous it is. I love a big traditional pit orchestra, and this 20-piece orchestra conducted by Jeff Rizzo is absolutely thrilling playing Irving Berlin's best. Director/choreographer James Rocco has pulled out all the stops, creating show-stopper after show-stopper. No excuse for a big dance number is missed, some of which reference the movie and some of which are totally new. The "Blue Skies" number (which replaces the "I'd Rather See a Mistrel Show/Mister Bones/Mandy" medley, which probably wouldn't play as well to today's audiences) has some incredible Chorus Line-like hat-dancing, and other moments remind me of Fosse. If you're longing for a big old-fashioned dancy-dance musical, White Christmas will most definitely satisfy.

If I were to dream of a White Christmas local cast, it would look pretty much like this one. Dieter Bierbrauer in the Bing Crosby role makes perfect sense to me, and he's perfectly lovely as Bob Wallace. Since the cast was announced I've been anticipating Dieter singing "Count Your Blessings Instead of Sheep," and it's better than I imagined (and almost as good as Dieter singing "Edelweiss" last year). But of course Dieter is charming and sings beautifully, the surprise here is that he dances beautifully too! And he has to, to keep up with Brian Sostek as Phil Davis, one of the Twin Cities' best actor/dancers. The two of them have a friendly, easy chemistry as the great Wallace and Davis. My favorite Phil scene "The Best Things Happen While You're Dancing" is just as fantastic here (although without the covered dock), and the new number "I Love a Piano" is a stunner.

On the female side of the equation, I can think of no one better for the Rosemary Clooney role than Ann Michels. So warm and dryly funny, and that voice! Another of my favorite scenes in the movie is Betty's brief solo venture to sing "Love You Didn't Do Right By Me," and I'm happy to report it's translated beautifully to the stage, complete with men in black turtlenecks posing around Betty. I'm not going to say Ann sounds like Rosemary Clooney, because she doesn't, she sounds like Ann Michels, which is to say gorgeous with her own unique style. This song, and this role, suit her well. The fourth member of the foursome, Betty's sister Judy, is the only lead role played by a non-local actor (the Guthrie could learn a thing or two about utilizing our fantastic local talent pool in the casting of musicals). Jenny Piersol fits in well with the cast, as Judy tries to keep Phil in line.

The supporting roles and ensemble are filled with such talent, it's impossible to name them all. A few favorites are Thomasina Petrus as the "concierge" Martha (who happily has more to do than in the movie, including singing a few songs), James Detmar as the General, Randy Schmeling as an old Army buddy, Twin Cities veteran Richard Ooms stealing scenes, Gary Briggle in a number of roles (and wigs), Caroline Innerbichler and Larissa Gritti as a couple of ditsy chorus girls, and young Valerie Wick, the cutest thing ever as the General's precocious granddaughter Susan (sharing the role with Natalie Tran, whom I know from previous shows is also the cutest thing ever).

I feel this is getting too long already, but I must mention the elaborate and quite charming set (which I hear is a rental, and probably doesn't come cheap, which explains the ticket prices). A couple of massive backdrops (the barn, the inn) are smoothly moved in and out behind the curtain as the show goes on in front of it. Smaller scenes are played on darling little sets that open out of the screen, reminiscent of an Advent calendar. And the costumes are absolutely dreamy! Lush and colorful and sparkly. (Scenic design by Anna Louizos and costume design by Carrie Robbins.)

White Christmas is truly a top-notch production, from the gorgeous set and costumes, to the lovely music brought to life by the orchestra and ensemble, to the terrific performances by the entire cast down to the smallest roles, to the big showy beautifully executed dance numbers. If you need a little escapist entertainment this December, look no further than White Christmas (continuing through December 31).

*The Cherry and Spoon Music-Theater Spectrum (TM pending): in a musical, characters sing in character, expressing their emotions and moving the plot forward. In a play with music, the music takes place in context, with characters singing in a way that would make sense in real life, and don't sing as the character. If you take the music out of a play with music, it still makes sense, although some of the impact is lost. If you take the music out of a musical, the story no longer makes sense.