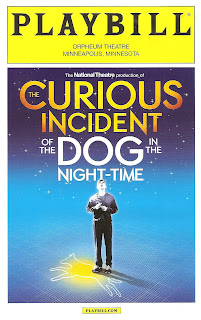 It's rare for Broadway plays to go on tour; typically it's the musicals that travel across the country. I'm not sure why that is, maybe producers think that those of us who live between the coasts would only go for the big splashy musicals, or maybe it's been proven that plays don't sell as well as musicals. Whatever the reason, when a play does go on tour (the only other ones I can remember are August: Osage County and Proof), you know it's something special. And The Curious Incident of the Dog in the Night-Time is most definitely something special. The story of a 15-year-old boy with an unspecified autism-like condition who goes on an epic journey in search of the truth is fantastically told in a clever adaptation, with stunning technical effects and innovative physical theater techniques, the high tech and the low tech combining in a unique way. And there's math, and a puppy, which makes it a winner in my book!

The play was first produced by Royal National Theatre in London, and that same production (adapted from Mark Haddon's 2003 novel by Simon Stephens and directed by Marianne Elliot), albeit with a new cast, transferred to Broadway where it ran for two years and won five Tony Awards, and is now on tour. It feels very British in terms of the accents and references, which only makes it more charming to us Americans.

Christopher (a wonderful Adam Langdon) lives in Swindon, England, about 80 miles west of London. The titular incident is when Christopher finds his neighbor's dog murdered, stabbed with a garden fork (which is British for pitchfork). He is greatly disturbed, and vows to find out who the murderer is, even though it means leaving his comfort zone and talking to his neighbors. His mother (a familiar face in Minneapolis native Felicity Jones Latta, twin sister of local actor Charity Jones) died two years ago so he lives with his father (Gene Gillette), who tells him to drop it and not make trouble. But Christopher continues with his investigation, which leads to uncovering not only what happened to the dog, but even more pivotal truths about himself and his family. He successfully travels to London on his own, despite the overwhelming stimuli for a boy with his condition, and eventually returns home to take a special test in maths (which is British for math). Through his adventures Christopher finds that he's more capable than he thought he was, and as able to grow and learn as anyone.

The tech-heavy set consists of massive electronic grids on the three walls of the stage, on which appear various lines, drawings, and video. Compartments open in the walls to reveal props at just the right times, and white boxes are the only furniture which can be made into anything, and also hide props. The way that a person with Christopher's condition sees the world is so well represented by lights and sound, especially in the train and London scenes, that at times I had to shield my eyes or plug my ears lest I end up curled on the theater floor (scenic design by Bunny Christie, lighting design by Paule Constable, video design by Finn Ross, sound design by Ian Dickinson).

Balancing out the essential technical elements of the production are the equally unique and necessary physical theater elements. The 15-person ensemble is on stage for most of the show, sitting on the sidelines when not playing various characters in the story. They use movement to help tell the story, including lifting Christopher up so he's flying or walking on walls. Christopher's teacher Siobhan (Maria Elena Ramirez) narrates the story as she reads from the book Christopher has written, and there are references to creating a play out of the book, the very play we're watching. At one point Siobhan interrupts Christopher when he's explaining one of his maths and promises him he can continue after curtain call, because people don't want to hear about maths when they go to see a play. This math nerd was thrilled when Christopher made good on the promise, working out a problem having to do with the Pythagorean Theorem as the formulas and diagrams were displayed on stage.

The clever adaptation, the sound, lighting, video, and set design, the movement, and the wonderful performances by the ensemble all combine for some unique and effective storytelling. The Curious Incident of the Dog in the Night-Time continues through this weekend only at the Orpheum Theatre; check it out for the rare opportunity to see a Broadway play on tour, and a uniquely special one at that.